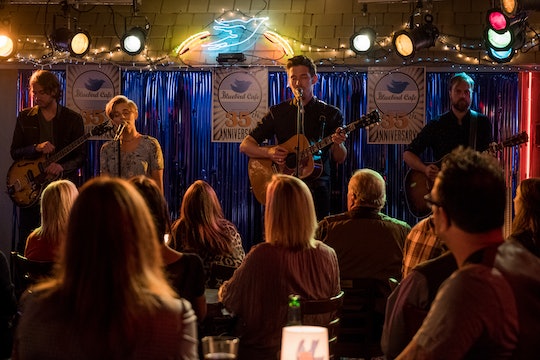 After a very tumultuous transition from network to cable, including new showrunners, losing its lead actress Connie Britton, and an abrupt tone shift from primetime soap to thoughtful, character-driven drama, Nashville is finally wrapping up its fifth season this week. It premiered at the beginning of this year and then took a several-month-long hiatus in the spring following the death of its lead character Rayna Jaymes, finishing out the second half of its 22 episodes this summer. So die-hard fans may be wondering: when does Nashville Season 6 premiere?

The good news is: it's definitely been picked up for a Season 6 renewal! The bad news? We don't have an exact premiere date just yet. Season 5 premiered the first week of January, and viewers have a promise from CMT that the show will be returning "early next year." So if I were you, I'd look for another premiere sometime around January 2018, hopefully. Although Nashville successfully pulled off the standard 22-episode network season on cable this year, they will be scaling back a bit for Season 6 to a more manageable 16 episodes. As Deadline points out, though, 16 episodes is still on the high end for a cable season, so we can continue to expect a steady helping of the drama and intrigue we've come to love.

The pacing of Season 5 was noticeably different from the show's run on ABC. There wasn't a giant cliffhanger or a plot twist at the end of every episode, like there was on the network version of the show. Rather than cramming in tons of plot, scenes focused more on developing the relationships between characters. Ensuring that they were all making choices that made sense for them was crucial in pulling off the big Rayna Jaymes death this season, which came as a result of Connie Britton feeling ready to move on from the show.

As a result, Daphne and Maddie have taken on meatier roles, giving Lennon and Maisy Stella a chance to flex their acting muscles. Scarlett's miscarriage this season continued to explore the pregnancy and motherhood through the lens of mental health, which the show has been doing since Juliette's postpartum depression storyline a couple of seasons ago. And the show has consistently been pulling off impressive guest arcs from the likes of Empire alum Kaitlyn Doubleday, The OC's Rachel Bilson, and Big Little Lies star Jeff Nordling.

Nashville definitely found its groove on cable, and with Hulu posting every episode the day after it airs, it's pretty easy for fans to keep up with it. You can catch the Season 5 finale on Thursday, Aug. 10.