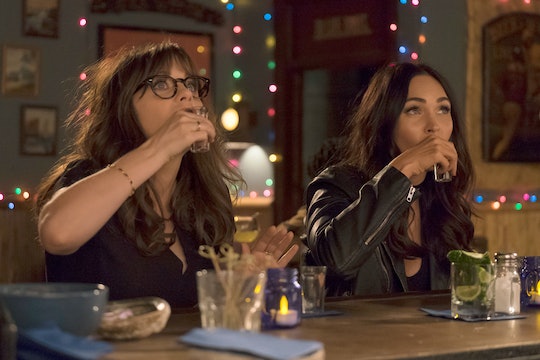 When Does 'New Girl' Return? Season 6 Is Just Getting Started

As much I love the holidays, the downside is that it's the start of the winter hiatuses of all my favorite shows and unfortunately New Girl isn't an exception. This Tuesday marks the winter finale of New Girl Season 6 and fans will have to bid their favorite group of friends a temporary goodbye. Thankfully the break in the season isn't too long, so fans won't have to wait that extensively to see Jess, Winston, CeCe, Nick, and Schmidt again. So when does New Girl return? The loft gang will be back on Tuesday, Jan. 3 at a brand new time of 8 p.m. ET. So really, when you think about it, it's only a few weeks away.

In the second half of the season, fans will also see the return of recurring guest star Megan Fox, who plays Nick's girlfriend, Reagan. The actress actually makes her return in the winter finale, but Fox will be sticking around for at least eight episodes, according to TV Line. Although the end of Season 5 saw Jess finally realizing she's still in love with Nick, Jess has since come a long way from that moment and is now in a committed relationship with CeCe's ex-boyfriend, Robbie. If Jess still has feelings for Nick, she's keeping them buried deep inside and is instead putting their friendship first. However, this may be easier said than done now that Reagan is coming back to town.

Before fans have to say goodbye to New Girl for the holiday season, the winter finale will send fans off in the Christmas spirit. The episode, which is titled "Christmas Eve Eve," will contain a secret Santa gift exchange that naturally goes awry. According to Entertainment Weekly, Jess gets Nick, who unfortunately purchases the gift she planned on getting him, which is how she ends up getting Reagan to come home a bit early as a surprise gift instead. The gift exchange also ends up going wrong when Jess somehow ends up with no gift at all, leading her friends to go to extraordinary measures to make it up to her.

New Girl has produced some great holiday episodes in the past and there's no doubt this one will be just as heartwarming and hilarious as the past Christmas episodes. However, once the episode ends, it'll be hard to say farewell to our favorite characters, even if it's only for a little while. Thankfully, they'll be back before we know it.