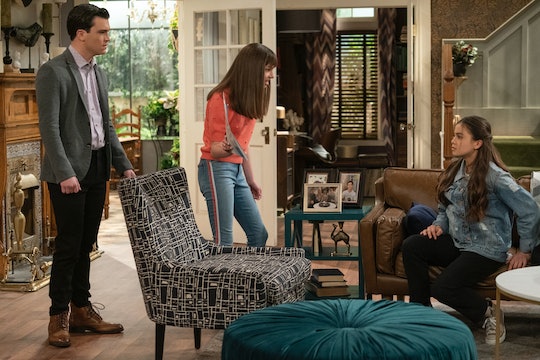 Netflix's latest dramedy, No Good Nick, is a show unlike most you've seen. The multi-cam sitcom that stars Melissa Joan Hart and Sean Astin is described as "a family friendly comedy and serialized crime drama." With an unconventional blend of mystery, humor, and heart all packed into Season 1, it's no wonder fans are eager to know when No Good Nick returns for part two. You can breathe a sigh of relief because the wait is officially over.

No Good Nick, and its beloved Thompson family, returns to Netflix Monday, Aug. 5. According to Deadline, Netflix ordered 20 episodes of No Good Nick, split into halves. The first half landed in April with no word when to expect the much-anticipated second half. Now, part two has finally dropped on Netflix.

The show follows Liz (Hart) and Ed (Astin), a suburban husband and wife who adopt 13-year-old Nicole/Nick (Siena Agudong), who happens to be a con artist duping the do-gooder family. Why would a young girl do this, you ask? Apparently, to get revenge for something the Thompsons unknowingly did. Not only that, Nick is also backstabbing her con artist foster parents, Sam (Ted McGinley) and Dorothy (Molly Hagan) while working for her dad, Tony (Eddie McClintock), who's in prison. Through all of her conniving, Nick bonds with the family, questioning her motivations going forward.

As reported by Deadline, Netflix's VP of kids and family, Melissa Cobb, announced their excitement about the series last September saying, "Melissa Joan Hart and Sean Astin are beloved by millions of fans around the world. We are delighted to bring them together as parents for the very first time. We hope to entertain kids and families with heart, mystery, and a lot of fun when No Good Nick comes to Netflix."

Astin and Hart are indeed beloved by many. While Astin is a star in his own right (The Goonies, Lord of the Rings, Rudy), Hart is the original Sabrina the Teenage Witch, as well as Nickelodeon star of Clarissa Explains It All. She also starred in Melissa & Joey, but it's been a minute since she's been part of a TV series. No Good Nick showcases her acting skills as a mom (for the first time!).

In an interview with Refinery 29, Hart spoke of the unique tone the series delivers, while still maintaining a family feel. "Sometimes I'm like, 'This is a kid's show. No wait, this is an adult show.' And I really go back and forth. At first we called it a comedy and then we realized this isn't a comedy, we can't call it that. It's really a dramedy [and] a serialized family mystery."

If you caught the first half, you know the series ended on a cliffhanger of sorts. With a new episodes dropping soon, you won't have to endure the end-of-season withdrawal much longer. If you need another reason to tune in, Sabrina the Teenage Witch and Buffy the Vampire Slayer fans can also rejoice in the Sabrina/Buffy crossover of your dreams when Charisma Carpenter (who played Cordelia Chase on the show) guest stars on No Good Nick as show producer sometime in the next 10 episodes. There is so much to celebrate, and so little time.

If you haven't caught onto No Good Nick, now is the time. Gather the whole family and marathon through the first half right in time for the second half. With each episode around 30 mins, you can easily catch up in a weekend. By then, you might even know how Nick plans to execute the rest of her plan (or if she will at all).