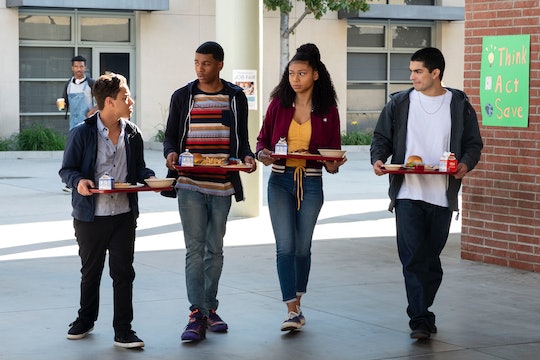 The Rumors Are True: 'On My Block' Is Returning For Season 3 & Fans Are Hyped

Netflix's teen dramedy On My Block was a huge hit in 2018, with a diverse cast, and a compelling story that can't help but draw viewers in. At the end of the second season, Monse, Cesar, Ruby, and Jamal face dangerous consequences as they try to keep Cesar safe from his brother’s gang. As soon as it seems like everything is going as planned, the season season ends with the entire group being kidnapped by masked men. So I know you're wondering — when does On My Block return for Season 3?

Season 2 of On My Block dropped on Netflix Mar. 29, and it has already been renewed for a Season 3. This is great news, but that's the only detail I have for you. No official date has been announced yet. However, it's safe to assume that you'll have to wait about another year to learn the friends' fate. I don't expect the show will be back before mid-to-late March 2020, following the once-a-year release schedule of most of Netflix's other shows. But I get it. A year is a long time to wait to discover what happens after the kids are initially grabbed.

For anyone wondering why co-creator Lauren Iungerich would put you through suffering that's similar, though tonally different, to Season 1's shooting cliffhanger (Me! I'm really curious!), she said in an interview with Entertainment Weekly, "We knew we needed a good cliffhanger because that is what our show is; it’s surprising and we need to keep the audience wanting to have that same fervor to come back and watch season 3, which I think we’ve achieved." Well, mission accomplished! But I'm still mad.

These kids have been through so much. Aside from Olivia's death, Jamal lost and then found the RollerWorld money, which seems like a simple problem compared to everyone else. Considering he had to use it to get Cesar out of the Santos, it's a huge deal. Ruby had to deal with survivor's guilt and the loss of a potential relationship. Cesar had to find a way out of his brother's gang and let Monse go find herself at her mother's house. And Monse had to learn her mom would always leave her.

It's just not fair that after the group is done fighting and everyone seems happy again they get kidnapped in broad daylight on the street. But there's more. Because according to Iungerich, viewers could've had a less frustrating cliffhanger. "There was an original ending that was not that ending that set up season 3 in a different way. It was tonally a little bit less of a shocking cliffhanger, and Netflix kind of pushed us and we came back with something else." Ugh! Netflix, can you give us a break with the trauma, sometimes?

I can't just blame the streamer though, because once the producers found their ending, they stuck to it. "By the way, it was super-debated and we really locked into it and said as producers, this is it, trust us, this is the way to end the show," Iungerich said. "[Netflix was] a little hesitant, but they came around when they saw it. While some kids are really frustrated by it, it left them really excited for season 3."

If by "kids" she means fans, I'm happy the show is coming back, yes. I'm not quite so happy that I might start Season 3 watching through my fingers in fear again. But such is life in On My Block world I guess.