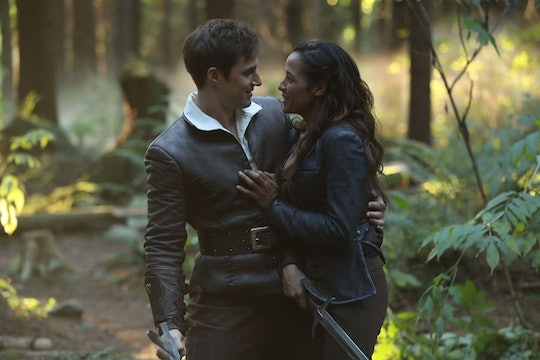 It's that time of year where all our favorite shows take a break for the winter/holiday season, and Once Upon a Time is no exception. The seventh season of the popular fairytale-filled drama airs its fall finale this Friday night, leaving many fans to wonder: when does Once Upon a Time return?

Update: Shortly after this article was published, ABC announced that Once Upon a Time would return on Friday, March 2, 2018.

Earlier: Unfortunately, the winter premiere date of OUAT has yet to be announced, however based on when the past four seasons have returned, Oncers can probably expect the winter premiere to air sometime in March. But before you fall into despair, it's totally possible the show could make a surprise return earlier than expected. You never know. If the winter hiatus does run long, that's the perfect time to catch up on this season if you've fallen behind, especially because there's so much that has happened.

Season 7 marked a complete reboot of the show where Henry is now an adult living in the city of Hyperion Heights, which is under a whole new curse. Also trapped in this cursed town is Regina, Hook, and Rumple, however their stories are much different these days. Besides these familiar faces, there are also a lot of new characters. In particular, there's Cinderella, known as Jacinda in Hyperion Heights, and her daughter, Lucy. It is Lucy who kicks off this new story, because just as Henry revealed to Emma that he was her son, Lucy shocked Henry when she appeared at his doorstep claiming she's his daughter.

Running the show this season is Drizella/Ivy, who created the curse to make her mother, Rapunzel/Victoria, suffer for never loving her the way she loved Drizella's sister, Anastasia. Drizella learned from the best (Regina) about how to make a curse and her's is pretty fool proof. If Henry and Jacinda kiss a true love's kiss, the curse will be broken but something terrible will happen to the people Regina cares about, including Henry. As you can imagine, that makes things rather complicated.

Although this season includes a lot of new faces, there are also a few familiar ones as well that have also popped up over the course of this season thus far. Emma dropped by and reunited with Hook and Henry, and early on in the season Belle was seen with Rumple and their son, Gideon.

During the fall finale, fans will see another familiar face. Because Regina still doesn't know the full scope of Drizella's curse, she realizes that she'll need help in order to defeat her. Thus she and Henry have taken a road trip to San Francisco where they will meet Kelly, also known as Regina's sister, Zelena. Kelly is a spin instructor and it'll be interesting to see Zelena in this alter ego, as she hasn't really had one before.

It's unclear if Zelena only knows herself to be Kelly or if she's aware of who she really is. If she doesn't already know about her magical past, Regina will probably have a hard time trying to convince her of it, especially because Zelena looks pretty happy in her life, based on the sneak peek of the new episode. Plus, even if Zelena is aware of who she really is, she may not want to get wrapped up in all of the drama. Zelena seems to be doing well for herself; why would she want to get involved in someone else's curse?

Probably because, despite everything, she and Regina are sisters. Although they've definitely had their ups and downs, at the end of the day they've always come through for each other, so this time probably won't be any different. But will Zelena's help really be enough to figure a way out of Drizella's curse? You'll just have to tune in this Friday, Dec. 15 to find out.