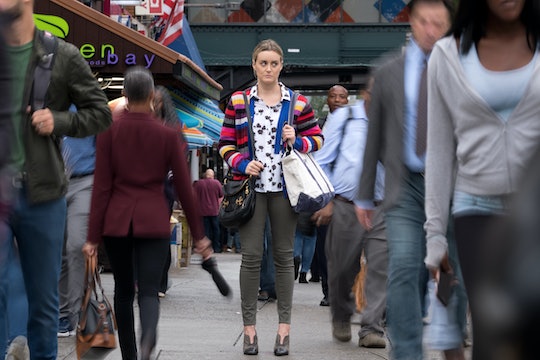 Is Anyone Really Ready To Say Goodbye To Litchfield Penitentiary?

Are you ready for some ice cream and justice? One of Litchfield Penitentiary's most popular inmates is. Netflix announced that the end is near for Orange Is The New Black months ago. But when does OITNB Season 7 premiere? Fans should start preparing blankets and snacks now. They've got a long night ahead soon.

Orange Is The New Black premieres its seventh and final season on July 26, and as you may know from the Season 6 finale, life is going to be a lot different for one of its leading ladies. Piper was released from prison and now must readjust to the freedom she was barely holding on to when viewers met her on Season 1. But as Taylor Schilling told Entertainment Weekly in May, life outside of prison doesn't immediately look as Piper expects it to. “She’s beginning to navigate what it’s like to live in the civilian world again, and learning that freedom doesn’t come immediately when she steps outside of prison,” said Schilling.

It's not exactly surprising to me (and probably many other fans) that Piper is going to struggle to readjust. She entered prison engaged to Larry and despising the ex-girlfriend she blamed for getting her sent to prison. She also had a best friend named Polly that she was starting a high-end candle business with.

As you may know, all of that has changed. The candle business dissolved long ago and Polly and Larry fell in love with each other and moved away. Piper stared another business while incarcerated selling prison panties on the black market. She's also had her life threatened and threatened others. I can't tell you about six seasons worth of drama in one post but it's enough to change a person, and Schilling told EW that Piper is definitely a new woman. “She becomes a little bit bolder expressing what she wants rather than trying to fit in and make it about other people," the actress said.

Plus, she's married to the ex she originally despised, and as Alex is still in prison, navigating that relationship is going to be a big focus of OITNB's final season. “That's really what gets dealt with in the season. I think that ends up being what is explored most,” Schilling told EW. “Piper really realizes that Alex is fundamentally a part of her journey. That’s the choice that Piper is making, that Alex’s love is very important to her.”

I'm excited to watch Piper readjust in life and love outside of prison. But over seven seasons, fans have grown to love so many other Litchfield inmates too. It's going to be hard to watch all of the inmates' stories end. Not just for the fans, but for cast and crew members. Dascha Polanco, who plays inmate Dayanara Diaz said the end is "bittersweet" for her and described the mood on set filming the last moments of Season 7 to Us Weekly.

“Crying, laughing and just a moment of, like, self-realization that you realize time flies and we have to live more in the moment,” she said. “There was a lot of food. Eating away your feelings.”

What did I tell you? Have those snacks ready before you sit down to watch OITNB's final season. But pace yourself. The show's final season hashtag may be #OrangeForever, but a bag of cheese doodles doesn't last that long, trust me.