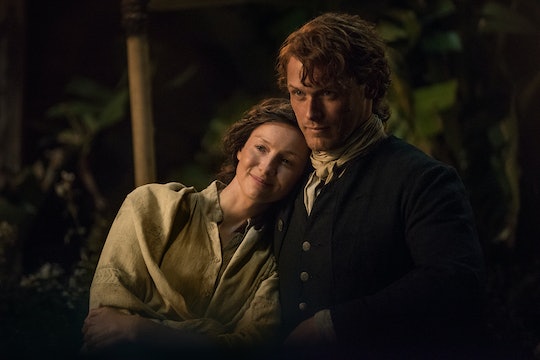 As a card-carrying Outlander obsessive, as soon as I finish an episode I'm immediately ready for the next. And when a season ends, for a few minutes I honestly wonder what I'm supposed to do with myself without my favorite time-traveling lovers to keep me going. Which leads me to a very important question. When does Outlander Season 4 premiere? At the very least, I know for sure that Season 4 is coming and it's just a matter of patience before it arrives. I'll have to learn to be a little patient then, I guess.

Fans are, understandably, worried about another Droughtlander. Season 2 ended with a huge cliffhanger when '60s-era Claire finally learned that Jamie didn't die at the Battle of Culloden after all and had to decide whether to go back in time to be with him again. Then the show waited a full year and a half to return to Starz, during which fans (I'm talking about me) wondered if it would ever come back. Luckily it did, and though the 13 weeks of Outlander Season 3 went by faster than 13 weeks should, I probably won't have to wait a year and a half for the next installment. Thank goodness.

It looks like the cast has already started filming Season 4 of the show in good old Scotland, and it is set to air in late 2018. I suppose I can wait until next fall for more Outlander. In fact, a little bit of information has already been released about Season 4, which will take Claire and Jamie on a whole new kind of adventure. After a particularly packed season with brand new characters, buried treasures, and journeys across centuries and continents, you may be wondering where on earth the story can go next. Luckily, there's plenty of adventure still to be had.

The fourth season will introduce some new characters of course, two of which have already been announced. Maria Doyle Kennedy, best known for Orphan Black, has been cast as Jocasta, Jamie's no-nonsense aunt. Ed Speelers from Downton Abbey will play the Irish smuggler and all-around scoundrel Stephen Bonnet. And in the most important casting news of all, two puppies have already been cast as the half-dog half-wolf Rollo, who book fans will know as a very important character and a very good boy. As well as introducing new characters, some old ones will be making a reappearance, including Fergus and Marsali, as well as Claire's daughter Brianna and her mild-mannered historian boyfriend Roger Wakefield.

As usual, the fourth season will take its cues from the accompanying book. The fourth book in the series is Drums of Autumn, the first book in the series to begin to shift focus to another love story — that of Brianna and Roger. In an interview with Digital Spy, Sophie Skelton, who plays Brianna, said that she and costar Richard Rankin were particularly eager for the fourth season. "We read the books before we actually got the roles, and we always said the fourth book was both of our favourites for our characters and their relationship together, and also just in terms of doing the roles," she said. Rankin added, "We can take these characters on a real journey and our story really kicks off in season four, I suppose."

In an interview with Entertainment Weekly, executive producer Matthew B. Roberts said that the idea of home was going to be important to the lovers in the fourth season. "Over the last three seasons, Jamie and Claire didn’t know where they are going to live," he explained. "They never plant their feet. Now they’re getting to that place that they can call home. But the meaning of home is different for people. That’s what we will dig into in Season 4."

As far as I'm concerned, wherever Jamie and Claire call home, I'm looking forward to seeing it.