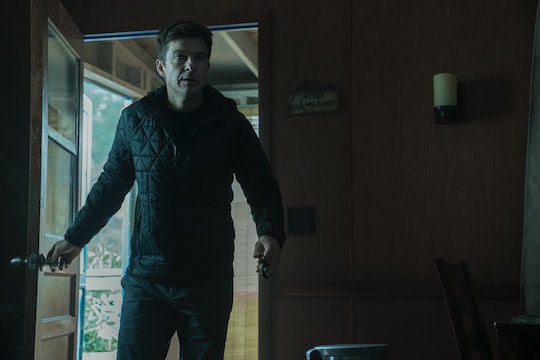 Season 2 Of 'Ozark' Is Gonna Be Wild

When Netflix drops an entire season of a series, I tend to lose about two days of my life. Last year, Netflix’s original series, Ozark, came to my screen without much fanfare, but boy did it leave an impact. The gritty drama is unassuming and addictive, and follows the chaotic life of Marty Byrde and the series of unfortunate events that turned his life upside down. The stakes have gotten higher for the Byrde family, so fans are wondering, when does Ozark Season 2 premiere?

Well, if you’re a fan of the series like I am, you’re in luck, because Ozark Season 2 is set to premiere on Netflix on August 31. In a press release the streamer confirmed that the series is returning with a ten-episode drop like Season 1, and has added award-winning Jessica Jones’ actress Janet Mcteer to the cast. Jason Bateman and Laura Linney are back as the complicated couple, Marty and Wendy Byrde, and Sofia Hublitz, Skylar Gaertner, and Julia Garner are set to return as well. Just as he did last season, Bateman is working as executive producer and will also be directing a few of the episodes.

In a panel at Deadline’s The Contenders Emmy event, Bateman explained how much he enjoyed dramatic work, after working as a comedic actor for most of his career, including roles in movies like Game Night and Horrible Bosses, and recurring roles on comedy series like Arrested Development, Silver Spoons, and The Hogan Family. Along with enjoying his portrayal of the complicated and intense Marty Byrde, Bateman had initially hoped to direct the entire series as well, but due to time and scheduling restraints, he was only able to direct a few episodes of the first season. “This was originally something I was really excited to do as a director — I really wanted to challenge myself to direct a 600-page movie. I was gonna direct all 10 episodes,” he said during the panel. “But as executive producer on the show, it allowed me to kind of scratch that same sort of challenge itch by overseeing that whole process. As you know in television, that’s sort of the responsibility lane that is similar to the director in a film."

The last time you saw the Byrdes, Wendy was well on her way to get out of the country with the kids, fake passports and all, but in a last turn of events, the family ended up staying together. And unlike the piddly $8 million dollars they had to launder before, they are now stuck with $50 million dollars in cash that they need to clean quickly. And if the family drama and money laundering wasn’t the worst of his worries, Marty now has to deal with the Snells, who have further complicated his relationship with the dangerous cartel that is breathing down his throat.

There’s also the question of what role Ruth Lagmore (Julia Garner) and her recently released jailbird father, Cade will play going forward. From all of the indications from Season 1, Cade is likely going to become an additional problem for Marty, and it will be interesting to see where Ruth’s loyalties lie. But the newest, and most worrying problem he has now is that he’s on the FBI’s radar, which means he has to conduct his illegal activities without getting caught.

I imagine the second season will be just as thrilling, if not more. The official Netflix description of the season reads:

In its much-anticipated second season, Ozark continues to follow Marty Bryde and his family as they navigate the murky waters of life within a dangerous drug cartel. With Del out, the crime syndicate sends their ruthless attorney Helen Pierce to town to shake things up just as the Byrdes are finally settling in. Marty and Wendy struggle to balance their family interests amid the escalating dangers presented by their partnerships with the power-hungry Snells, the cartel, and their new deputy, Ruth Langmore, whose father Cade has been released from prison. The stakes are even higher than before and the Byrdes soon realize they have to go all in before they can get out.

Season 1 of Ozark is available on Netflix right now, and Season 2 will be available in its entirety on August 31.