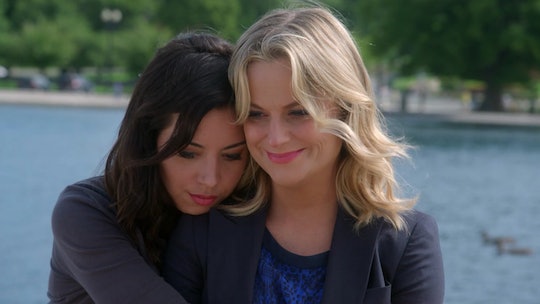 This 'Parks & Recreation' Marathon Will Keep You Entertained All Day

According to The Hollywood Reporter, the much-loved sitcom will premiere on Comedy Central with a marathon on Martin Luther King, Jr. Day. At any point on Jan. 21, you can tune in to the network and find an episode of Parks and Rec awaiting you. Comedy Central will run through every season in order, though unfortunately there aren't enough hours in the day to watch all 125 episodes. The marathon comes to an end at 11 p.m. ET when the Season 3 episode "Media Blitz" finishes. Comedy Central's regular programming picks up from there, though Parks and Rec will be part of the lineup going forward.

It's not the only show joining the network in 2019. In addition to its original programming, Comedy Central acquired reruns of BoJack Horseman (which was previously only streamable on Netflix) and Fox's King of the Hill and The Cleveland Show. But if you don't have access to Comedy Central, don't despair — you can still find a way to watch Parks and Rec.

Though you won't find episodes of the show on its original network, reruns of Parks and Rec currently air on FXX and E!. It's also streaming on all three of the major streaming services: Netflix, Hulu, and Amazon Prime. If you have cable, then you can find the show on a variety of channels, but if you have a streaming subscription then you're equally able to catch up on the adventures of Leslie Knope and company. A press release from Comedy Central revealed that "select episodes" would also be available on their website and app.

Parks and Rec making the jump to Comedy Central is especially timely because it's coming up on its 10th anniversary. To celebrate the ten years since its 2009 debut, the cast and crew will appear at the 36th annual PaleyFest in March 2019. Deadline reported that the first three panels of this year's PaleyFest would focus on This Is Us, Pose, and Parks and Rec. Fans will be able to enjoy all the show's stars as they revisit the series and maybe even share some behind-the-scenes anecdotes.

In a joint statement shared with The Hollywood Reporter, star Amy Poehler and showrunner Mike Shur said, "We’re thrilled to be reuniting at PaleyFest. And truth be told, we were all hanging out already anyway, so carpooling will be easy."

It might have been tough for fans of Parks and Recreation to be without it the last few years, but now that thirst shall be quenched. You can count down the days until the Paleyfest reunion by rewatching episodes on Comedy Central to your heart's content.