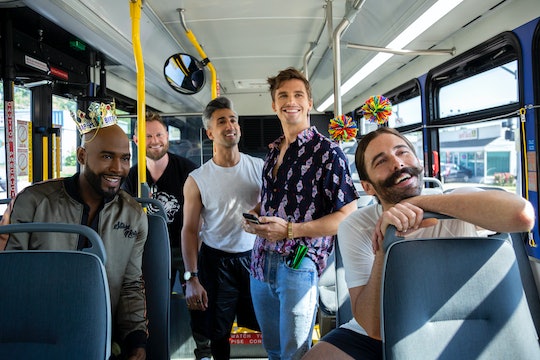 Netflix's hugely popular Queer Eye reboot premiered just over a year ago, but the series is already churning out its third season. Fab 5 super fans may be wondering when Queer Eye Season 3 premieres, and the good news is, it's just around the corner. You can expect a new batch of episodes on Mar. 15, when the new season drops on Netflix.

Season 3 follows the same eight-episode format of the previous two seasons, with one notable twist: one of the episodes actually features the Fab 5's first duo, a pair of sisters who work as barbecue pit masters (pit mistresses?) in Kansas City, Missouri. Season 3 also gives viewers more women makeovers than in any previous season — an appropriate choice, considering it drops in the middle of Women's History Month. Last season featured the show's first female hero, the instantly beloved Mama Tammye, and this time around, viewers will get three episodes dedicated to women. Along with the Jones BBQ sisters, Queer Eye Season 3 introduces viewers to Jody Castellucci, a 49-year-old men's prison guard who loves to hunt, grew up with brothers, and perennially views herself as "one of the boys." In one of the more moving clips from Season 3, Karamo Brown recruits a "circle of empowerment" to help guide Jody through her crisis of femininity in the presence of a strong and diverse group of women.

The last woman featured in Season 3 is 23-year-old Jess Guilbeaux, who also happens to be the show's first ever lesbian makeover. Kicked out by her religious, adoptive family when she came out at 16, Jess was forced to put her college education — and the development of her multiple, intersecting identities — on hold as she struggled just to survive.

In the episode, titled "Black Girl Magic," Fab 5 step in to take some of Jess's challenges off her plate. By doing so, they give her the space to cultivate her own sense of self as "a strong black lesbian woman," as Karamo puts it in another tearful moment from the trailer. Oh yeah, you're obviously going to need to stock up on tissues if the teaser clips from this season are any indication. Jess also reunites with her biological sister, according to Entertainment Weekly's exclusive episode synopsis, while the Fab 5 emphasize the theme of chosen family.

If you're already anticipating the withdrawal after finishing Season 3 all in one sitting, then worry not. If the show's production schedule mirrors last year's, then Season 4 is likely to drop in just a few months, around June or July. But there will also be four bonus episodes between then and now. Much like the special that followed Season 2 — an international romp that took the series to Yass, Australia for a 20-minute mini-episode — Season 3 will also be followed up by a four-part special filmed in Japan, according to Entertainment Weekly. So there's still plenty of Queer Eye to look forward to this year.