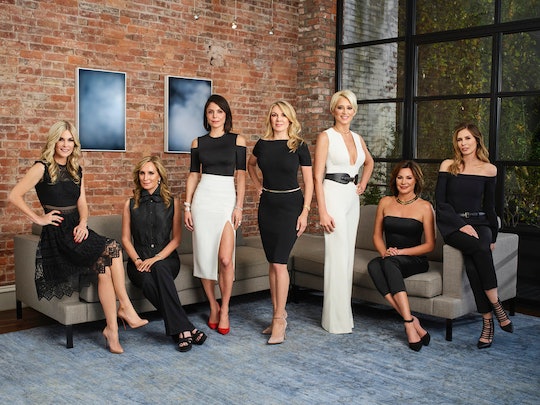 Following arguably the drunkest getaway trip in Real Housewives of New York history (though one would think it'd be more difficult to top "turtle time"), there's only one RHONY episode left before the two-part reunion. As is customary, the show will end on a celebratory note, with the cast epilogues playing out over Tinsley's thank you party for Sonja, which Lady Morgan may or may not show up to, according to sneak peeks. So when does Real Housewives of New York return for Season 10? Well, the show hasn't formally been picked up for a tenth season just yet, but production is actively looking for new cast members and, as one of the most popular installments of the Real Housewives franchise, it's pretty much a sure bet that the series will be renewed.

Since we don't have an official renewal yet, we obviously don't have a premiere date. But we can make some inferences based on past seasons. The show typically premieres in the spring, with the last three seasons debuting during the first week of April. So our best guess for when the show will return is sometime around April 2018. And we already have an idea of potential themes for next season.

According to Page Six, Bravo was irked by the timing of Luann de Lesseps' divorce announcement, because it came just days after shooting a "grueling" 10 hours' worth of reunion special. A source told the outlet:

They are going to have to reshoot. Otherwise, the reunion shows will seem hopelessly out of date with Luann talking about how much she loves her husband and how they are working out their problems.

The bombshell announcement came just seven months after Lu and Tom tied the knot in a suspiciously over-hyped affair last New Year's Eve. So it seems pretty inevitable that next season is going to take us into a redemption storyline for Luann. Plus, she really seems most liked by her castmates when she's single and mingling, rather than partnered and settled down. The erstwhile Countess gets a little judgey and sanctimonious when she's married, and she seems much more sex-positive and relatable when she's dating.

Sources also say that the show is looking for more diverse casting next season, partly at the behest of Bethenny Frankel. She told Parade in July:

The series may not have a renewal yet, but there is still plenty of drama to mine in the RHONY-verse.