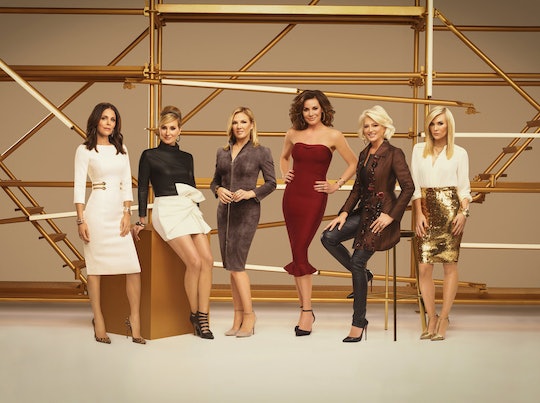 One look at the trailer below tells you plenty of last season's drama has not been put to bed, but there are also big changes to prepare for. Tinsley Mortimer and Sonja Morgan are still bitter former roommates (been there, understand that) though Mortimer is "off again" with ex Scott Kluth and living alone. Here's to hoping she's ready to mingle and chooses not to wallow in wedding dresses instead of moving on.

Everyone's favorite "love her or hate her" business maven Bethenny Frankel is back, but her bestie turned adversary Carole Radzwill has left the show after six seasons to focus on her career in journalism. Of course, she couldn't go without throwing some shade behind her. Her statement to E! News reads in part, "I have worked with amazing producers, made great friends, and I'm thrilled to leave frenemies behind. I will remember this entire experience with delight, humor, and a veracious accuracy. Next." Ouch.

Bethenny has more important things to worry about than former castmates, however. This season will most likely find her attempting to heal after the death of her boyfriend Dennis Shields this summer. He died of an apparent overdose, according to the New York Post. There are sure to be some hard moments for Bethenny, but she's probably glad to be moderating fights this season rather than smack in the middle of a cold war. Perhaps my favorite feud rolling over from Season 10 involves Dorinda Medley's favorite designer, the one and only Jovani. You may remember that Jovani loaned Luann de Lesseps a few outfits for her cabaret show last season. And every time Lu stepped out on stage in one of his designs Dorinda cried, "Jovani!"

But according to the trailer, when she and the Countess meet over a meal with Bethenny to discuss the incident, Dorinda seems to have a selective memory. "I didn't heckle the Jovani dress," she says, when Bethenny invites her to just own up to her actions at the show.

Meanwhile, Sonja and Ramona Singer are just ready for a good time. The trailer shows Ramona won't be lacking men to flirt with and, of course, Sonja brings a party with her wherever she goes. Hopefully, she won't go too far but the emergency vehicle and clip of someone passing out in the sneak peak has me worried.

For the most part, being part of the Housewives requires one to balance their drama with an outlandish ability to have a good time, and Carole's replacement is ready.

New 'Wife Barbara Kavovit is the CEO of her own construction business, Evergreen Construction. I bet working in a male-dominated industry has prepared her well for standing her ground during any drama she's in the middle of on Housewives. But Kavovit is all about love in the Season 11 trailer. She kisses a lot of girls and likes it.

In October, Barbara told Us Weekly that one of her career goals is to "inspire women to pick up a hammer to give those essential tools that they need, so they don’t have to rely on their father or their next door neighbor, and they can do it themselves..."

She'll fit right in to the group as she's already friends with Luann and Dorinda (though she may feel a bit awkward smack in the middle of Jovani drama). In any case, I can't wait to meet her, and pick up where the rest of the cast left off.