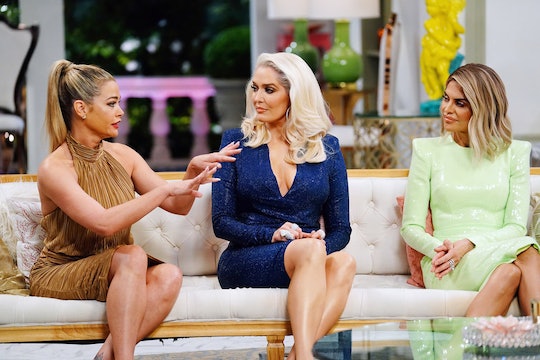 'RHOBH' Might Have A New Cast Member In Season 10

The Real Housewives of Beverly Hills recently concluded its ninth season on Bravo. This one saw some big changes to the cast, like the exit of long-time cast member Lisa Vanderpump and the arrival of actress Denise Richards. The third and final part of the reunion special airs on Jul. 30 on Bravo, and viewers are sure to be craving new episodes as soon as the credits roll. So when does RHOBH Season 10 premiere?

That's uncertain. One assumes that the show will continue on to another season because the Housewives shows rarely get axed, but there hasn't been official confirmation from Bravo about a renewal. The network hasn't made any announcements about the premiere date of a potential tenth season, either. That could be because Season 9 only just ended; they may not have even started filming for the new season yet, which makes it even more difficult to figure out when it will air. But looking at past seasons can indicate a pattern that Season 10 may follow.

RHOBH typically premieres in the fall or winter. Though its earlier seasons tended to begin anywhere from October to November, in recent years it has shifted. Seasons 6 through 8 all debuted in December, while Season 9 started the latest in February. If Season 10 follows its predecessors, then it may premiere in late 2019 or early 2020.

But that's just a guess. Until the network makes an announcement, one can only speculate. While a tenth season is still technically in question (but nearly guaranteed), Kyle Richards seemed secure about the show's future when talking to Newsweek. "Our ratings have been really fantastic so I would assume [we'll be back for Season 10]," she said, though she allowed, "But you never know in this business." All in all, though, she was "grateful that the viewers are still tuning in after this many years."

And RHOBH might be a different show when it returns. Lisa leaving is bound to shake up the cast, especially if a new Housewife joins the crew. In an exclusive interview with HollywoodLife, Andy Cohen said that he thought RHOBH would "go in new directions" going forward. He confirmed that "someone else" would be added to the cast in Lisa's absence, but would not be replacing her, because that just wouldn't be possible. He also didn't offer any hints about the new cast member. But he was confident about the group of women who remained on the show, calling the cast "a team of all-stars" and a "powerhouse group."

Cohen revealed that the "door will be open" for Lisa if she ever chooses to return to the show, though he didn't seem very positive about the possibility. That would certainly stir up drama between the women if it ever occurred, but another new co-star might do the job just as well. RHOBH is on a break for several months while its new season comes together, but it shouldn't be long before new episodes arrive. In fact, Season 10 could debut not long after the holidays, making it the perfect belated gift.