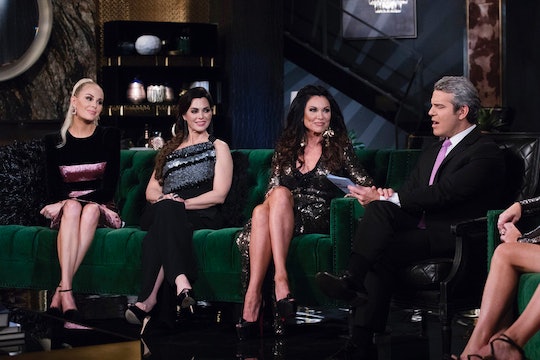 The Future Of 'RHOD' Remains Unclear

It's official. After the second season of The Real Housewives of Dallas wrapped up, these ladies are my favorite contingent of Housewives. But unfortunately, that doesn't mean that they will automatically be back. So when does Real Housewives of Dallas return for Season 3? Tragically, there has been no news as of yet regarding the third season of these delightfully outrageous women and their, ahem, charitable endeavors. Obviously, I desperately hope that they will be back, as I found them far more entertaining than their Orange County cohorts this season.

If the show does return for another season, one has only to look at the usual pattern of Real Housewives seasons to predict when Season 3 will premiere. Generally on the Bravo network one can count on at least two Real Housewives shows to be airing at a time. The premieres are generally staggered, presumably to drum up the most viewers possible on the premiere, finale, and reunion episodes. The dates of the show also tend to change depending on a lot of different factors. For example, Real Housewives of Atlanta premiered at the same time as the show about Atlanta star Kandi Burruss's other show about the reunion of her girl band Xscape and Married to Medicine, all of which are set in Atlanta. Coincidence? I think not.

Season 1 of The Real Housewives of Dallas premiered in April of 2016. Season 2 premiered in August of 2017, wrapping up the season in November. Based on this pattern, it seems safe to assume that, should the series be renewed for a third season, filming will take place in the late winter and spring of 2018 to be ready for a premiere date in late summer or early fall. This is just a guess, however, as there has been no official announcement about the future of the show. Perhaps the powers that be at Bravo are waiting to see how the show performs in its reunion episodes before committing to another season of it.

This is a shame. The women who star in the older and more established Housewives franchises like OC and New Jersey have been doing this for far too long. They know how to pick a fight and how to choose sides and how to keep their noses relatively clean. They're professionals. The Dallas Wives are still fresh enough to come completely undone from time to time. LeeAnne Locken is a reality TV treasure. We need more of Locken screaming at the camera operators to turn off the camera, smashing glasses dramatically for no particular reason, and making vague death threats toward her castmates. We need Brandi Redmond chasing women around a beach with a dildo. We need pink dog food.