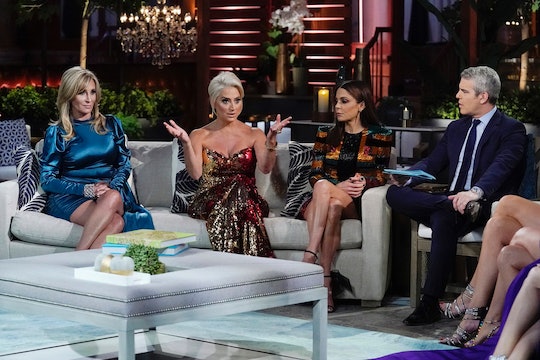 It's not something anyone wants to face, but it's the ugly truth: another season of The Real Housewives of New York City is coming to an end. What will you do without a weekly dose of Tinsley's fake eyelashes and Bethenny's sarcastic quips? I can't tell you. But I can try to figure out when RHONY Season 12 will premiere, so you know exactly when the women will be back in your life.

It's difficult to say with any certainty when RHONY will return. Bravo hasn't made any official announcements about the Season 12 premiere date, or even whether or not the show has been renewed. It feels like a sure thing because RHONY is a staple of the Real Housewives franchise, but it hasn't been confirmed, technically. But even without solid answers from the network, it's possible to speculate about the show coming back. Seasons of RHONY tend to follow a familiar pattern, which makes predicting the debut date a little easier.

Since its very first season, RHONY has typically premiered in the spring. With the exception of Seasons 2 and 5 (which began in February and June, respectively), the show always starts a season in early March or April. That makes it likely that Season 12 will do the same. Unfortunately, that also means it'll be some time before fans get to see new episodes.

The eleventh season of the show was an eventful one, full of unexpected moments of bonding and much more typical dinnertime blow-ups. The combination of the two is part of what makes RHONY so great: you see genuine moments of friendship, like Bethenny, Dorinda, and Ramona discussing their upbringing when they visited Ramona's hometown. Because the women are really friends, it makes their explosive arguments even more intense. I hope they all indulge in some self-care after filming, because I'm sure it take a lot out of them — even though the unfolding drama is riveting as a viewer.

In addition to the ups and downs of friendship in Season 11, there was a new addition to the cast: Barbara joined as a Friend Of the Housewives, tagging along on vacations and cheering up Luann when she needed it. But Barbara had some trouble connecting with the other women, which puts her presence in Season 12 in question. Barbara told Us Weekly that she would "consider [returning]," but it's still uncertain whether she will be made the offer. She served a purpose as one of more dedicated members of Team Luann, but even their bond was tested by the end of the season. It's possible Barbara will be a one hit wonder when it comes to RHONY.

But there could always been other casting shakeups. The cast of RHONY is a core group that works well with each other, but bringing someone new into the mix can always result in some satisfying shift in the usual dynamics. But that's still a long way off. Season 12 might not be on your screens until 2020, so until then you can enjoy Part 3 of the Season 11 reunion when it airs on Bravo on Jul. 25.