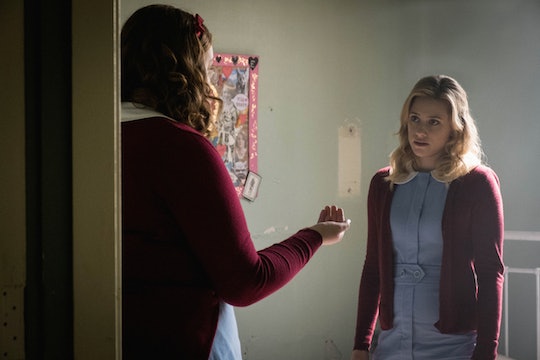 Fans Can't Wait For The Thrilling Season 3 Return Of 'Riverdale'

Season 3 of Riverdale has been full of twists and turns, but it looks like Archie and the gang are finally closing in on the identity of the Gargoyle King. In the midwinter finale, Betty found a connection between the Gryphons and Gargoyles game, Hiram, and the drugs being spread around town. With so many questions still looming, fans are anxiously waiting to dive back into the mystery. So when does Riverdale Season 3 return?

Luckily fans won’t have to wait too long, because Riverdale returns on Wednesday, Jan. 16.. The trailer for the new episode looks riveting, and drops of few hints on what fans can expect. Veronica and Reggie are seen sharing a tender moment, which I’m sure will have Varchie fans fuming. And somehow, Archie manages to get himself locked in the basement of the Sisters of Quiet Mercy, where he encounters the Gargoyle King. Whether he’s hallucinating from fizzle rocks or actually face to face with the villain dressed as the Gargoyle King, Archie looks terrified. Betty, who finally busted out of the Sisters’ grasp after transforming herself into the Gryphon Queen, is back in Riverdale with Jughead, and it looks like his mom, Gladys, will be joining them in town as well.

One of the most exciting little details from the promo of the new episode — titled “No Exit” — is the appearance of Kelly Ripa. Back in November, Ripa posted a picture on Instagram revealing her role on Riverdale as the mistress of Hiram Lodge, a character played by her real-life husband, Mark Consuelos. Her character is described as Mrs Mulwray, a "confident and tough” femme fatale who finds herself “caught up in a conspiracy that's much bigger than she initially realized."

In an interview with E! News, Ripa said that her character is unlike anything she expected, and fans should brace themselves for a surprise. "I've been preparing myself for this for 25 years, so I feel like I'm pretty good at playing a mistress,” said Ripa. “It's an unexpected twist though. It's not what you expect. I didn't get my script until the day before—it's all very carefully guarded—and my role is not what I expected at all." In the promo, Ripa is seen pointing a gun at someone, but it’s unclear who she’s targeting. Is it Hiram? Did she find out about his connection to the fizzle rocks?

Riverdale showrunner, Roberto Aguirre-Sacasa told Entertainment Weekly that the new episode should answer some questions, and that the second half of the season will dive deeper into Hiram’s motives to takeover the town. He also revealed that the Gargoyle King Hiram sees in his office at the end of the midwinter finale is a person, not a hallucination, and as the season continues, fans will find out more about their connection. “Who the Gargoyle King is, is something that absolutely snakes its way through the season,” said Aguirre-Sacasa. “I will say though, we’ve actually got a lot of mysteries up and running and a lot of weird stuff and we start unpacking and resolving some of that stuff sooner rather than later.”

Fans can also expect to see more of Jughead’s mom, Gladys, through the second half of the season. Aguirre-Sacasa told Entertainment Weekly that her presence in Riverdale will impact the rest of the characters, and fans will start to understand who she really is. “There are lots of clues in Episode 8 about who Gladys is and what she’s capable of that we definitely will be building out later in the season,” said Aguirre-Sacasa. “She starts to affect everyone in the show — in good ways and bad ways and troublemaking ways and surprisingly warm ways.”

With a season still steeped in so much mystery, it’s no wonder fans are anxious to jump back into the action. Luckily, the wait is almost over, because Season 3 of Riverdale returns on Wednesday, Jan. 16 at 8 p.m. ET on The CW.