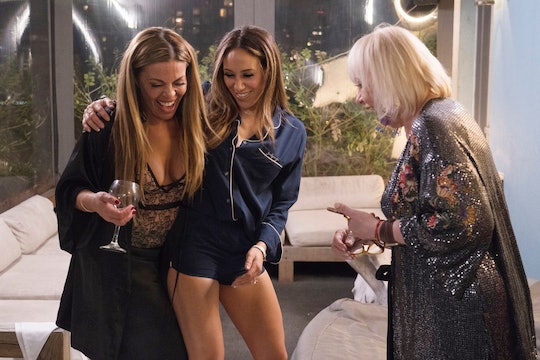 A lot has happened in Season 9 of The Real Housewives of New Jersey. There were casting shakeups and reignited family feuds; tween singles were dropped and wine glasses were thrown. The finale airs on Bravo on Feb. 13, but hopefully that won't be the last that fans see of this show. So when does Season 10 of RHONJ air?

The premiere date of Season 10 hasn't been announced yet, because RHONJ technically hasn't been renewed yet. While its return may feel like a sure thing, there's been no confirmation from the network about what's going to happen. But it would be hugely shocking if RHONJ was cancelled, because it's been a regular presence on Bravo since its debut in 2009. It almost feels like a guarantee that the show will be back, though without an announcement from Bravo, fans have to remain open to all possibilities, no matter how absurd they may seem.

It's very likely that the series will be renewed, considering its continued popularity with fans. And it's possible to theorize about when Season 10 will air, because the show's lengthy run means it tends to follow a fairly predictable schedule — though there have been some changes over the years.

Season 1 debuted in early May 2009 and that general date stayed the same over the next few seasons. However, Season 4 switched things up by starting off in late April instead. After that, RHONJ jumped around: though the first episode of a new season always aired in spring or summer, it moved from June to July throughout Seasons 5, 6, and 7. There was another adjustment to the schedule in the most recent seasons that pushed things even later in the year. Season 8 premiered on Oct. 4, 2017, while Season 9 started on Nov. 7, 2018.

Since the series shifted to autumn, that means Season 10 might follow suit and premiere later this year. It could return as early as October 2019, though November is also a possibility. It seems less likely that the show will revert to its spring/summer schedule because that wouldn't leave much time between the finale and the upcoming season. It's purely speculation, but in my opinion, the most plausible guess for the Season 10 premiere is sometime in fall 2019. That means in six or seven months, RHONJ could have filmed and edited enough material to entertain fans all over again.

Until then, viewers can still look forward to tonight's finale, "Hotheads and Hookahs," which promises to put Teresa's friendship with Danielle to the test. The tension between Jennifer, Melissa, and Dolores may come to a head once again as well. Anything could happen at the end of Season 9, but it's sure to be a finale fans won't forget any time soon. And before the season is done for good, all the fights and insults will be rehashed in a reunion special that will most definitely span a few episodes.

Season 10 of RHONJ might not be right around the corner, but it shouldn't be too far off, either.