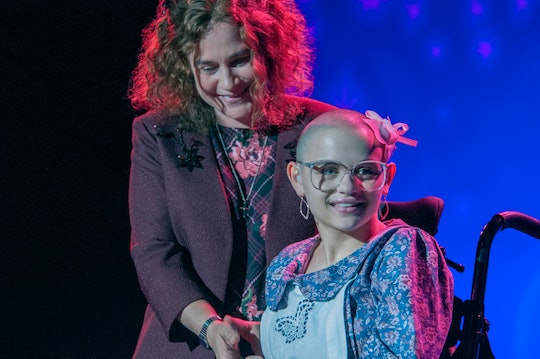 Season 2 Of 'The Act' Could Take A Disturbing New Turn

If you’re a fan of true crime, there’s a good chance that Hulu’s new series, The Act, has become your latest obsession. The show brought one of the most riveting murder cases in recent years to light, and now that the first season is coming to a close, fans want to know when the series will come back. So when does Season 2 of The Act premiere?

Unfortunately, Hulu has yet to renew The Act for a second season, so there’s no way to know if or when the series will get a new premiere. So far, the drama has earned plenty of praise from both critics and fans, and after seeing Joey King and Patricia Arquette’s mesmerizing performances, I wouldn’t be surprised if the show lands a few Emmy and Golden Globe nominations later this year. With enough positive buzz, Hulu may find incentive to renew the series, but it likely won’t be a continuation of the current story.

The show is an anthology series, so if it does return, it will probably take on a whole new crime. In an interview with Esquire, The Act co-creator Michelle Dean talked about what a future season could look like. “There's no Season 2 right now, in the sense that Hulu has not picked it up,” she explained. “The Act was designed as an anthology: obviously the title refers to a couple things. Obviously the act of the crime, but also the act that Dee Dee and Gypsy were putting on for the public. So yeah, if there were a Season 2, those are the stories that we would be interested in telling.”

Season 1 followed the story of Gypsy Rose Blanchard (Joey King) — a young woman who was emotionally and medically abused by her mother Dee Dee (Patricia Arquette), and in turn plotted her mom’s murder with her online boyfriend, Nick Godejohn (Calum Worthy).

According to USA Today, Dee Dee may have suffered from Munchausen syndrome by proxy — a mental disorder that involves a parent inventing and inducing illnesses for their otherwise completely healthy child, mostly in order to gain attention, sympathy, and financial benefit. Dee Dee convinced Gypsy Rose that she had muscular dystrophy, leukemia, asthma, epilepsy, and vision problems, when in reality, Gypsy Rose was just a healthy child who was being subjected to all kinds of unnecessary medical treatments.

As reported in Springfield News-Leader, Gypsy Rose met Godejohn on a Christian dating website, and after three years of their online relationship, the couple made a plan to kill Dee Dee. In court, Gypsy testified that she and Godejohn wanted to kill her mother because it was the only way they believed she could be free of her forced and unnecessary medical abuse. According to Fox News, Godejohn was sentenced to life in prison after being convicted of first-degree murder and Gypsy Rose pleaded guilty to second-degree murder and is currently serving a 10-year prison sentence.

The season finale of The Act ends with Gypsy Rose in jail, and considering this is where the real Gypsy Rose’s story currently stands, there’s really no place left for the story to go, at least for now. If the series does get picked up for a second season, you can count on it being something completely fresh, but equally compelling.

The Season 1 finale of The Act premieres on Wednesday, May 1 on Hulu.