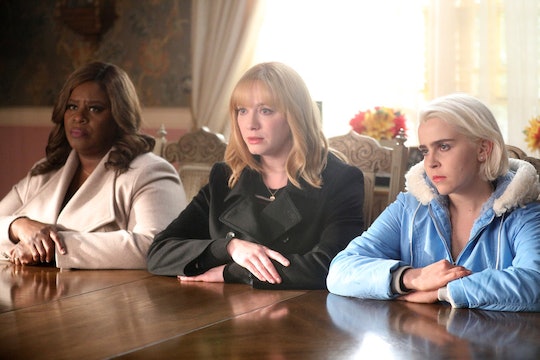 If you love the show as much as I do an early series renewal from NBC is not enough for you. You want to know: "when does Season 3 of Good Girls premiere?" I definitely understand the urgent need for a specific date, trust me.

But please join me in a collective deep breath because it's way too early for me to have an answer for you. The Season 2 finale episode, titled "King" on Sunday May 26 airs at 10 p.m. ET and then it's anyone's guess what happens next. Just rest assured that a Season 3 is on its way.

Even though the Season 1 release on Netflix helped the show find new viewers, that release hasn't helped the ratings of the current season much, Deadline reports. The early renewal is a big sign that NBC believes in Detroit's baddest moms as much as I do. That's definitely a win, so I'm not about to get greedy.

“We’re so excited to continue following the friendship and adventures of these three incredible women while also exploring relatable issues in both funny and surprising ways,” Lisa Katz and Tracey Pakosta, Co-Presidents of Scripted Programming, NBC Entertainment, said in a statement as reported by Deadline. “Congratulations to Jenna Bans, and our amazing writers, cast and crew who give these stories depth and humanity.”

In a recent interview with the LA Times, Good Girls star Christina Hendricks said the humanity and the mix of drama and humor is what makes the show so appealing to her. “We play it very real. There are these very intense, dramatic moments that are sort of heart-wrenching and really hard," she said. "But these characters are just weirdos, and they’re out of their element, and so funny things ensue." I'm a fellow weirdo and when I think about what would happen if I tried to rob a bank (hypothetically, of course) I feel no excitement. I just get anxious and laugh about all of the mistakes I would make.

That's where any similarities between Beth and I end, because even though Beth, Annie, and Ruby definitely make mistakes while committing crimes, one thing Beth doesn't lack is confidence in any aspect of her life. “There’s a dichotomy of the things that are really Beth, because when you see her with a million cupcakes and cookies out and making perfect sandwiches with faces and getting her kids safely to school, that’s very, very Beth," Hendricks said in the LA Times. "And then there’s a moment where she says, in Season 1, I think it’s in the pilot: ‘Are we gonna sit around and let people dictate what happens to us or are we gonna take control and do it ourselves?’ And that’s very Beth."

The only person who knocks her off her game is her boss Rio, who's also, you know, head of a gang. But she doesn't channel her feelings by hiding — they have sex. So, it's complicated. "She’s never had a relationship like this or a person like this in her life and she doesn’t really know what it is...It’s very confusing,” Hendricks continued. That's putting it lightly if you ask me.

Beth is the one mama out of the trio that is most likely to go completely to the dark side. I don't know when or if she'll make it all the way there yet, but if she does I'm ready to join her in Season 3, especially if she brings cupcakes.