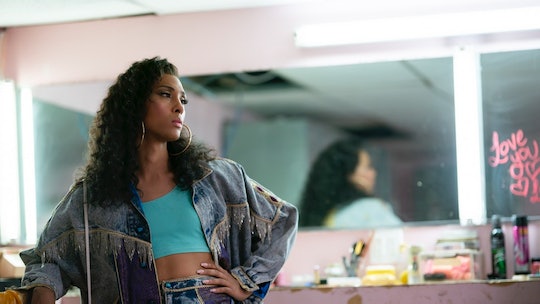 I'm Already Counting Down The Days Until 'Pose' Season 3

It may feel like Pose's second season just began, but it's coming to a close on Aug. 20 with "In My Heels." All of the characters will be ending the season in a very different place than they started it, for better or worse. Leaving them will be especially hard after experiencing those highs and lows alongside them, so all fans can do now is wait for Season 3. But when does Season 3 of Pose premiere? Personally, I wouldn't mind if it was next week.

But alas, it is not. The exact premiere date of Season 3 hasn't been announced yet, but there is a silver lining. Pose has already been renewed for Season 3, which Deadline announced back in June 2019. Renewal makes sense, because the show exceeded expectations when it came to viewership, on top of breaking boundaries in representation. In a statement shared with Deadline, John Landgraf, the Chairman of FX Networks and FX Productions, said that Pose had "elevated our culture and the TV landscape like few shows before it." The network was honored to continue their partnership with series co-creators Ryan Murphy, Brad Falchuk, and Steven Canals.

Though it's impossible to know exactly when that third season will air, a little guesswork can offer a tentative possibility.

The first two seasons of Pose premiered a year apart, almost down to the date. Season 1 debuted on Jun. 3, 2018, with Season 2 following on Jun. 11, 2019. They were just a year and a week apart, making it seem like June is Pose's designated start month. If that pattern holds true, then there is a chance that Season 3 will also premiere in the first half of June 2020. That's just a theory, but one that seems plausible considering what has come before. However, it also means the wait for Season 3 will be a long one. If it drops next June, then a whole nine months will pass before the House of Evangelista snatches your wig again.

But speculation isn't a guarantee. A lot of factors go into the production of a television show, including the schedules of the people making it and starring in it. Demand is a factor as well. The show could get pushed forward if people are clamoring for it enough, but it could also get pushed back based on the availability of its cast and crew. At the moment, all anyone can do is guess; there are so many variables at play that it's difficult to know anything with any certainty. The only thing that's confirmed is that Pose will return, even if the "when" is a little hazy.

It's equally difficult to imagine what to expect when the show does come back. There was a time jump between the first two seasons, with Season 2 picking up a few years later in 1990, so one could assume that the same might be true in Season 3. Its future premiere might find the characters a few years older, once again in a new place and trying to figure out what that means for their lives. Audiences will be eager to see where Pose takes its characters whenever it decides to return.