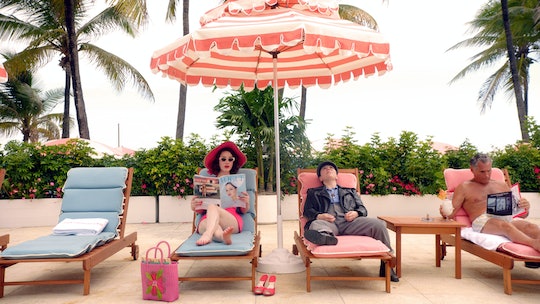 If you’ve been missing Midge and her chaotic-but-hilarious life on The Marvelous Mrs. Maisel, you’re not alone. After the Season 2 cliffhanger ending, fans have been yearning to see how Midge, played by Rachel Brosnahan, fares as she takes her act on the road. Amazon released an exciting preview of the season, and after seeing all the fun Midge is having, fans can’t help but wonder: when does Season 3 of The Marvelous Mrs. Maisel premiere?

The third season drops on Dec. 6, as reported by TV Line, which means you’ll get to dive back into the series just in time for the holidays. The last time you saw Midge, she was getting ready to join Shy Baldwin (Leroy McClain) on his international tour through the U.S. and Europe. In the final episode of Season 2, after seeing Lenny Bruce’s (Luke Kirby) act about being alone, Midge goes to see Joel (Michael Zegen) and kisses him after telling him she needs to be with someone who loves her.

The trailer for the new season features glimpses of Midge’s jet-setting life on tour with Shy Baldwin, as well as a court scene in which Joel tells a judge he supports Midge’s decision to go on the road. The preview also offers a look at all the returning characters, including Midge’s manager Susie (Alex Borstein), her parents Rose (Marin Hinkle) and Abraham (Tony Shalhoub), her comedian friend Lenny Bruce, and her nemesis Sophie Lennon (Jane Lynch), who Susie now secretly represents.

The teaser also features a look at star Sterling K. Brown’s (This Is Us) guest role on the show this season. In an interview with ET, Brown talked briefly about his character, but didn’t divulge any spoilers. "He's black, which I think is really cool," he said. “'Maisel' doesn't tend to get black that often, but when Brown shows up, it gets real Afro-American, which makes me happy!"

In the same interview, the show’s lead actress, Rachel Brosnahan, talked about Midge’s dynamic with Joel, and why she asked to be with him for that one night. “I don’t think it’s about their relationship,” Brosnahan told Variety. “I think it’s about trust and comfort. She’s entering this brand new path that’s scary. There’s no path that’s already been forged ahead of her, unlike her former life, and I think it’s a moment of comfort and connection before she steps off the deep end on this big tour.”

From the looks of the trailer, it’s going to be an exciting new season. Luckily, with the premiere just a couple of months away, fans won’t have to wait too long to jump back in to the fun.