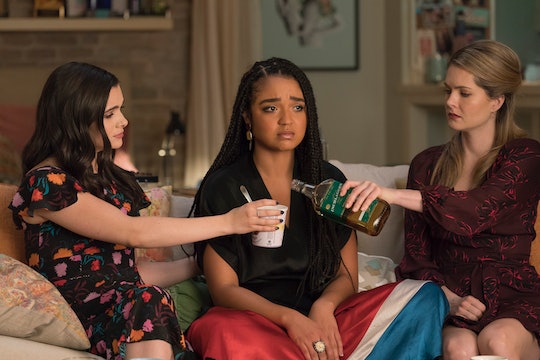 You Don't Need To Go Cry In The Fashion Closet, 'The Bold Type' Will Return

Jane, Kat, and Sutton have dealt with a lot of disappointment in Season 3 of The Bold Type. Jane finally published her big story about abuse in the entertainment industry, but then her boyfriend cheated on her. Kat lost an election and is having feelings for the ex who broke her heart. Sutton... Her boyfriend is rich and that's hard, I guess. Only the finale is left, and one episode isn't enough to wrap up all that fallout. So when does Season 4 of The Bold Type premiere?

According to Variety, the series was renewed for a fourth season, so it will definitely be back. But Freeform hasn't yet announced its precise premiere date, possibly because it's just too soon to say. The Season 3 finale airs on Jun. 11 and the network might be waiting until a little bit of time has passed before they figure out where to stick Season 4 in the schedule. Shows on Freeform tend to get moved around a lot, but looking at the premiere dates of the past three seasons may give an indication of when to expect Season 4. It's not confirmation, just a theory, but it could help figure out how long you have to wait for new episodes.

The Bold Type first premiered back in 2017 on Jun. 20, and Season 2 followed its lead. It debuted in June as well, though slightly earlier on the twelfth. Season 3, however, went in a totally different direction by dropping its first episode on Apr. 9. That makes it difficult to deduce a specific date or even month when Season 4 might air. But it does seem like the show always airs in late spring, so if I had to hazard a guess, I would predict that Season 4 might debut in spring 2020. That feels like a long way away, but it would follow with previous seasons.

There will be some changes in the show in the upcoming fourth season. Deadline reported that Amanda Lasher would be stepping down as showrunner and Wendy Straker Hauser will take over. She's been involved in the show since Season 1 as a producer and writer; previously, she worked on Hulu's The Handmaid's Tale. She'll be the one to untangle all the complicated situations the Scarlet gals have found themselves in this season — and it's definitely gotten very complicated.

In the Season 3 finale, "Breaking Through the Noise," the personal and professional will intersect again. Sutton's design seminar culminates in a fashion show that may determine the future of her career. Kat is caught between her new girlfriend Tia and her returning love Adena. Jane, meanwhile, is standing firm on her resolution to end things with Pinstripe — for the moment, at least. Depending on how it all shakes out, these three women could find themselves in totally different positions when the new season begins. Hopefully the finale doesn't end on a cliffhanger, because it may be more than a few months before there are any new episodes to enjoy.