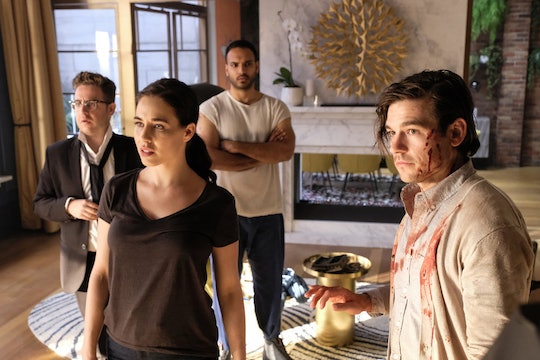 Here's Everything We Know About Season 5 of 'The Magicians'

Season 4 of The Magicians premieres on Jan. 23 on SYFY, which is welcome news for fans who have been anxiously awaiting its return. Luckily, while they get to enjoy this season, fans can revel in the assurance that the series is coming back for another spellbinding season next year. SYFY recently confirmed the show’s renewal, so eager fans are dying to know: When does Season 5 of The Magicians premiere?

While there is no official release date yet, fans should expect to see Season 5 drop sometime next year. If SYFY sticks with the same schedule as past seasons — Seasons 2 through 4 all premiered in January — Season 5 should premiere in January of 2020. Waiting a whole year sounds brutal, but considering the fact that Season 4 just started, and will continue to run through late Spring, the wait won’t be as long as it seems.

SYFY announced the Season 5 renewal just a day ahead the Season 4 premiere, and Bill McGoldrick, NBCUniversal Cable’s president of scripted content, attributed the renewal to the show’s steady momentum. "The Magicians raised the bar at SYFY and has gained momentum season after season, attracting a new audience to the channel,” he said in a written statement. “We are proud of this series as it continues to break the boundaries of storytelling.”

The network confirmed that along with current showrunners John McNamara and Sera Gamble,executive producer Henry Alonso Myers will also showrun Season 5. Deadline reported that in a joint statement, McNamara and Gamble were excited to see Myers join them as co-showrunner. "Henry has been with the show since minute one of season one,” they said. “His talent, professionalism and love of all things magical has been instrumental to our success. We couldn’t be happier to see him become co-showrunner. Also, he bakes the greatest bread this side of the Hudson River.”

Of course, fans are beyond thrilled that the series is coming back next year, but the showrunners seem just as delighted. “We couldn’t be happier or more excited to conjure another year of magic and all it entails — love, hate, loyalty, betrayal, sex, foul language, drugs, battling gods, monsters, and the most dangerous enemies of all: other human beings," McNamara and Gamble said in their statement. “We have the best writers, producers, directors, cast, and crew in the charted multiverse. Here’s how strongly we believe this: Anyone who tries to poach a single one of them will be cursed. And we have the voodoo dolls to do it."

The January 2020 premiere date for Season 5 is speculative, but I’m sure SYFY will release a detailed schedule later this year. Overall, it’s been a great news week for fans of The Magicians. Not only do they get to enjoy a brand new season, they can rest easy knowing that they have another magical season to look forward to next year.