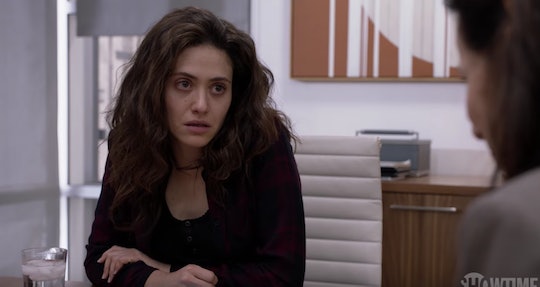 Shameless fans are probably getting antsy about the return of their beloved series. And who could blame them? The Season 8 finale went down all the way back in January, after all — so dedicated fans are probably having some serious Gallagher family withdrawals right about now. As they look sadly at the calendar, plenty of fans are probably wondering: When does Shameless come back? It turns out, Season 9 is just around the corner.

According to TV Guide, the ninth season of Shameless will premiere in less than two weeks — on Sunday, Sept. 9, to be exact, at 9 p.m. (ET) on Showtime. Yep, you read that correctly. The wait is nearly over! The premiere date was actually revealed back in June via the Shameless YouTube channel, according according Hollywood Life. And for those who also happen to be fans of Kylie Jenner, the format of the video probably seemed eerily familiar. That's because the entire thing aimed to replicate the famous 11-minute video Jenner posted following the birth of her daughter, Stormi Webster, in February, Hollywood Life reported.

If you remember, Jenner's video is largely narrated by her BFF Jordyn Woods, as she tells the story of how Jenner and Travis Scott fell in love, when she found out she was pregnant, and more. Similarly, in the Shameless video features Emmy Rossum (AKA Fiona Gallagher) narrating over old footage of the Shameless episodes, while addressing the show's fans and sharing her reaction to learning of the "conception" of Season 9.

To top it all off, the video has the same song playing in the background that Jenner's did. At the very end of the video, instead of the screen reading, "To Our Daughter," and providing the birth detailsf for Stormi Webster, the Shameless ending screen reads, “To Our Fans Season 9 Premieres September 9 9/8C Only On Showtime.” LOL. You have to admit, their attention to deal is actually quite impressive. Feel free to compare for yourself!

For those who are wondering what's in store for the Gallagher family, the description of the new season is as follows, as TV Line reported:

Frank sees financial opportunity in campaigning and decides to give voice to the underrepresented South Side working man. Fiona tries to build on her success with her apartment building and takes an expensive gamble hoping to catapult herself into the upper echelon. Lip distracts himself from the challenges of sobriety by taking in Eddie’s niece, Xan. Ian faces the consequences of his crimes as the Gay Jesus movement takes a destructive turn. Debbie fights for equal pay and combats harassment; and her efforts lead her to an unexpected realization. Carl sets his sights on West Point and prepares himself for cadet life. Liam must develop a new skillset to survive outside of his cushy private school walls. Kevin and V juggle the demands of raising the twins with running the Alibi as they attempt to transform the bar into a socially conscious business.

Sounds like a whole lot of drama, right? But these are the Gallaghers, after all — so fans should probably be used to the shenanigans they get themselves into by now. Fun fact: Season 9 is also exciting for fans in that it will feature the show's 100th episode. Pretty cool, huh?

After the long summer hiatus, fans of a plethora of TV shows are probably getting anxious about when a new season will begin. I know I'm looking forward to the coming months when popular TV shows all start to return. If you're anything like me, then you're probably looking forward to Grey's Anatomy coming back on Thursday, Sept. 27 at 8 p.m. (ET) on ABC. Or This Is Us returning for Season 3 on Tuesday, Sept. 25 at 9 p.m. on NBC. (Man, that's going to be an epic week for TV at my house.) I don't care what anyone says — with pumpkin-flavored everything, cooler weather, and the return of awesome TV, fall is by far the best season.