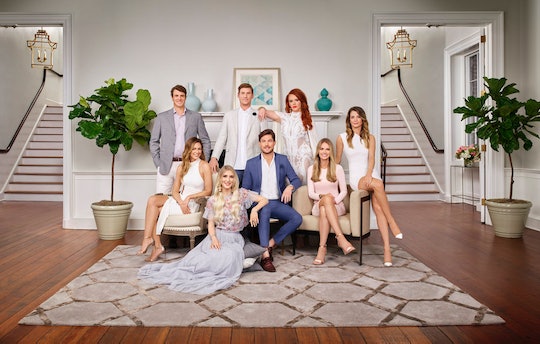 More Like This
If Your Kid Can’t Get Enough Dinosaurs, They’ll Love These 20 Shows
I *Literally* Could Not Be More Excited For The Parks & Rec Book
New Disney Junior Show Aims To Help Kids “Navigate Real-World Issues Of Racial Injustice”
Everything There Is To Know About The Friends Reunion

For one thing, the rivalry between Ashley and Kathryn is clearly far from over. Fans saw everyone in the cast pretty fully on #TeamKathryn in Season 5, and it doesn't look like that has changed, even if Ashley and Thomas Ravenel are no longer dating.

Though Ashley apologized for criticizing Kathryn's parenting in Season 5 in an Instagram post that has since been deleted, nothing ever really goes away on social media after you hit "Post", especially when you're on TV. In case you forgot, Ashley called Kathryn, to her face, a bad mother, going so far as to say she was "nothing but an egg donor." Not the best of looks.

“After many chats with my friends and family with children, I never understood the unbreakable bond a parent has with their child," she reportedly said in part of the statement. “I can listen and learn and be more respectful in the future but until I’m blessed with a child, I can never truly understand the sacrifices a parent makes on behalf of their children."

Personally, I'm not buying what she's selling. The most basic rule of any feud, whether it's on TV or not — but especially when it's on reality TV — is to keep the kids out of it. Now, many a Bravo star has broken that rule. But they don't claim ignorance in an attempt to seek redemption. You don't have to be a mother to know the rules, even if you haven't yet experienced maternal bonding. I'm just a cat mom, and I have news for my friends — if they have a problem with me, they are to keep my cats names out of their mouths and avoid any mention of them.

If you think I'm being too hard on Ashley, I assure you I'm not. “I wish [Bravo] had the decency to contact me and give me a chance. Because I would like to have a redemption story, the same way Kathryn did." she told People exclusively in September. Uh huh.

It's the worst kept secret that reality TV storylines are carefully crafted. Bravo probably let Ashley back for some spice, but one look at the Southern Charm Season 6 trailer tells me what happens when someone blatantly decides that they want a "redemption" story. Hint: they don't get it.

Drama aside, Ashley says Kathryn and Thomas' kids, 5-year-old Kensie and 3-year-old Saint, are well-adjusted. "They’re sweet, sweet children,” she said in another interview in with People in July. “And very loving and happy.”

I really do hope Kathryn sorts all of this out with Ashley at some point in Season 6. Because right now it just doesn't sit well.