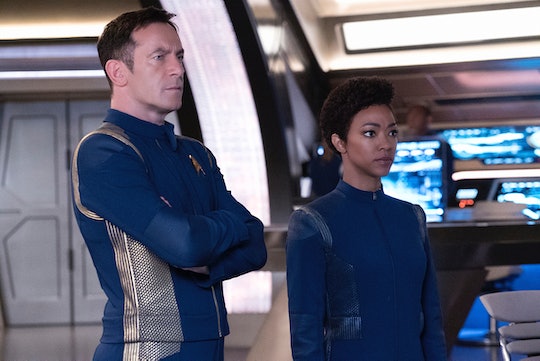 'Star Trek: Discovery' Is Boldly Going Where Many TV Shows Have Gone Before — On Hiatus

The first season of the new Star Trek series, Star Trek: Discovery, has gained popularity amongst Trekkies, old and new. However, with the midseason finale airing tonight, many fans are anxious to know when does Star Trek: Discovery return? Thankfully, the wait won't be too long for fans.

When Star Trek: Discovery first began, it wasn't on the best footing. The show lost its creator and showrunner very early on and the release date was pushed back to accommodate for the changes. Even so, since its premiere and subsequent episodes, the show has done very well for itself, bringing in more subscribers to CBS' streaming site, CBS All Access, where the show exclusively airs. The show has gained so much popularity that the first half of the season was extended to include one more episode, bringing it up to a total of nine before the fall break. But when will the last six episodes of the season be released?

Though the beginning of the season was elongated, the second half of the season will still air sometime in January as planned, though an official release date has yet to be announced. Regardless, that's only about a two month wait between the two halves of the season, so the hiatus won't be for that long.

It's unclear when the Season 1 finale will air exactly, but if a new episode releases each week like this season, the finale will probably come in either late February or early March. But never fear Star Trek fans; this isn't the end of the road for Star Trek: Discovery. The show is only just getting started and has already been renewed for a second season.

Marc DeBevoise, President and Chief Operating Officer of CBS Interactive, revealed the news to Deadline at the end of last month, remarking on how in just the six episodes that had aired at the time "Star Trek: Discovery has driven subscriber growth, critical acclaim, and huge global fan interest for the first premium version of this great franchise."

Although many fans were outraged to learn they'd have to pay to see the new Star Trek, it seems now that the money is worth it. This new segment of the Star Trek world stars Sonequa Martin-Green, Doug Jones, Jason Isaacs, Anthony Rapp, Michelle Yeah, and Shazad Latif and acts as a prequel to the original Star Trek.

Martin-Green plays Michael Burnham, a young woman who was sentenced to live in prison but is allowed to join the Starfleet to help save the world. Leading the ship is Captain Gabriel Lorca (Isaacs) and throughout the series the Starfleet team explores new worlds and discover new life forms. Though the show introduces new a whole new set of characters, there is still the same Star Trek feel that has come with each new series, most notably, the Klingons are still around and it is them who the Starfleet must face off against in an building war.

Of course, while there are bits of the past in the show, fans love how updated the new version of the series is. With more updated technology and visual effects, the Star Trek world looks even more fascinating now than when the original series aired in the '60s. Additionally, the show should also be applauded for its diversity — like its decision to cast a black woman as the protagonist rather than a white man, therein breaking away from past iterations.

To see where the first half of the season leaves off, make sure to tune in to the Star Trek: Discovery midseason finale this Sunday at 8:30 p.m. EST on CBS All Access.