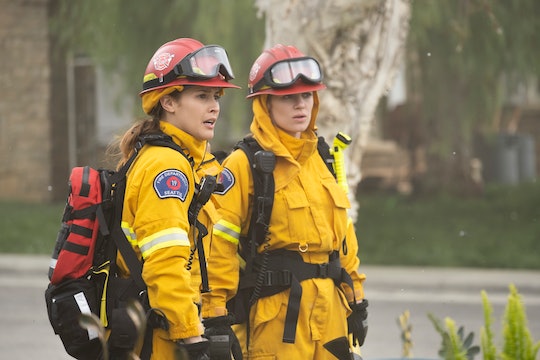 The Season 2 finale of Station 19, "Into the Wildfire," airs on ABC on May 16. It follows the finale of its parent show Grey's Anatomy, creating a two-hour block of disasters both natural and romantic. But when does Station 19 return? Fans will have a void to fill in their Thursday night schedule until it's back.

According to Deadline, it's going to be a long wait. It'll be some time before viewers can expect new episodes of Station 19. Though Grey's Anatomy will return for Season 16 in the fall, Station 19 isn't slated for the autumn. It seems like it might return mid-season, which is a break in its typical pattern. It first debuted as a Grey's spinoff in March 2018; then its second season premiered in October of that same year. ABC hasn't confirmed the exact date that Season 3 will start, but if it won't be back in the fall, then it might not air until 2020.

It's possible that Station 19 had to cede its time slot to A Million Little Things. Its first season spanned September to February on ABC. If it sticks to that for Season 2, then perhaps it will have to finish up before the firefighter drama can reclaim the spot.

Station 19 has always indulged in a crossover or two with Grey's Anatomy, which makes sense because they belong to the same shared universe. One show would not exist without the other. But while those crossovers were previously limited to special events, they're going to become much more commonplace in Season 3. That's because Grey's showrunner Krista Vernoff will be taking over Station 19 too, as reported by Deadline.

At ABC's network upfront presentation, Entertainment President Karey Burke revealed that viewers "can expect crossover events between these series every week." That could mean major changes are in the works for both shows. Instead of two distinct episodes every week, it may start to feel like a two-hour movie where characters can jump from one show to another whenever they like. These two shows already share a lot, but it looks like things are about to become even more blended.

But not just yet. It's not clear what will be happening in the world of Station 19 while Grey's Anatomy jumps ahead this fall. Time will keep moving in Seattle, after all. The doctors will be getting up to all kinds of drama while the Station 19 crew await their new season. Will the firefighters merely be kept on pause until they catch up? Or will they be able to make visits to Grey Sloan Memorial before their own show is back?

Viewers won't know the answer for several months. Perhaps you'll be able to see a few of your favorite Station 19 characters at Grey Sloan before Season 3 officially kicks off, but maybe not. It's too early to tell right now. You have quite a wait ahead of you, but the increase in crossovers might just make it worthwhile.