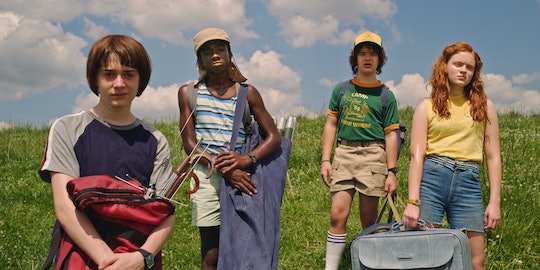 Prepare For The Return Of The Upside Down

Fans of The Upside Down have been feeling jittery anticipation for more since Stranger Things 2 ended. Eleven and Mike are officially an item, Hopper has become a real dad, and Steve has become World's Best Babysitter. Since then, everyone with a Netflix account has been waiting for Stranger Things to return and luckily it is just around the corner. So let me answer your biggest question: When does Stranger Things Season 3 premiere? The premiere is just around the corner. Fans of the show have a lot to celebrate on July 4, because that's when Season 3 drops.

As for what to expect from the season, it's probably not surprising that I have no major spoilers to report. But Dacre Montgomery who plays bad boy Billy Hargrove and Cary Elwes, who plays new character Mayor Larry Kline, did drop a few hints when they stopped by the WGN Morning News in Chicago. "I think it's more intense, powerful and terrifying than seasons one and two combined," said Elwes. That's a pretty intense statement (especially considering the sheer emotional gut punch of watching Eleven and Hopper bond as daughter and father). So fans will have to wait and see if he's right.

It's easy to see that Montgomery is more than just an actor on the cast. He is a fan of the show and the creative process that goes into building every element of The Upside Down. "It feels like the picture is just unfolding in such a huge way," he said on WGN. "And even watching it recently the CGI, everything feels so much bigger. The world has just expanded but the narrative still sticks to its core I think of the first and second seasons of remaining really true and interesting and dynamic and it's been such a great season to be a part of."

Both actors credit the richness of the show to the freedom afforded to the show's creators — the Duffer bothers — by Netflix. Elwes told WGN, "Netflix changed the landscape of our industry completely. It made all the other studios sit up and take notice. He continued, "this show in particular is just a phenomenon."

Montgomery made an important observation about the people that Netflix is giving their platform to. "I think also giving a voice to creatives that may not have had the same kind of voice in the studio and network system [is important]," he said. As a viewer, he's fascinated and excited by the fact that Netflix allows creators to make "freeform style episodes" and has paved the way for new types of narrative content.

Of course, fans might just like the show because it transports them to another decade and then launches them into an otherworldly mystery. No matter why you watch, get ready hide in your room and shut the door July 4. I don't know about you, but if I'm going to watch any explosions I'd rather they be on screen than in the sky. Stranger Things Season 3 might just have some in store.