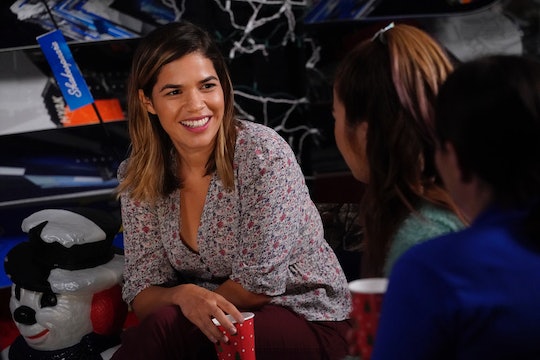 'Superstore' Will Be Back Before You Know It

What better way to celebrate the holidays than with a special holiday episode of Superstore? Although the show hasn't been on since Nov. 2, Tuesday night will serve as the actual midseason finale, before it leaves your TV screens again until next year. So when does Superstore return from its winter hiatus? Thankfully, the wait for new episodes won't be too long.

The back half of Superstore's third season will begin airing on Thursday, Jan. 4 on NBC at 8 p.m. EST followed by the returns of The Good Place, Will & Grace, Great News, and Chicago Fire. So fans will only have about a month long wait before they get to see what happens next for the staff of the Cloud 9 superstore. But before the hiatus officially begins, there's the Christmas episode, which will be filled with the same level of hilarity as every other episode of Superstore, mixed in with some holiday cheer and debauchery.

During the special, the Cloud 9 employees attempt to come together to bring seasonal joy to their customers and themselves, however when feuding roommates Garrett and Jonah have to suit up as Santa Claus and one of his helpers, it doesn't go well. The two end up accidentally airing their grievances in front of a bunch of kids who just want to tell Santa what they want for Christmas. Awkward!

On top of that, Amy, who's had a rough year with her divorce and everything else going on, decides to have a good time by spiking the punch at the Christmas Eve staff party. Naturally, everyone then proceeds to get drunk. Additionally, you can also expect to see a reindeer — yes, a real reindeer — pop up throughout the episode for reasons that have yet to be revealed. All in all, it sounds like it's going to be an unforgettable episode that you certainly won't want to miss.

If you've fallen behind on this season, the winter hiatus is the perfect time to catch up. Almost all of this season's episodes are free to watch on NBC.com, however you will need to sign up for an NBC profile or link to a TV provider to watch the season's premiere episode. However, if you have a Hulu subscription, you can find the whole season available for streaming there as well as the first two seasons. So if you've somehow missed out on watching this show, you can also binge the whole series. What better time to binge than during the holidays?

Along with the holiday episode of Superstore, there will also be a holiday episode of Will & Grace, which will include a tribute to Debbie Reynolds, who was a recurring star on the show. Reynolds played Grace's mom, Bobbi Adler, and appeared in a total of 12 episodes during the show's original run. Reynolds died on Dec. 28, 2016, just a day after her daughter, Carrie Fisher.

The episode will also take viewers back in time to the Victorian era and follow new characters who bare an uncanny resemblance to Will, Grace, Karen, and Jack. You can see how the episode plays out tonight, when it airs on NBC at 9 p.m. EST right after The Voice. The episode will then be followed by the holiday episode Superstore at 9:30 p.m. EST and Chicago Fire at 10 p.m. EST. It'll be a full night of great TV that you certainly won't want to miss. Make sure to check it out and don't worry, your favorite shows will be back before you know it.