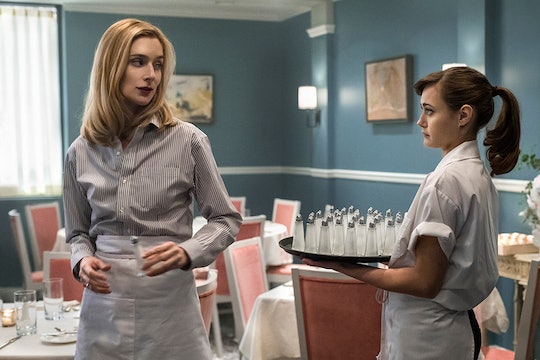 Is 'Sweetbitter' Coming Back For Season 2?

It was short but sweet, but sadly the first season of the Starz series, Sweetbitter, comes to an end on Sunday, June 10. The series, based off of the novel by Stephanie Danler, was only six episodes long and, naturally, left fans wanting more. So, when does Sweetbitter season two premiere? Unfortunately, for now, a second season premiere date has yet to be announced. Thankfully, though, a future for Tess (Ella Purnell) was secured when Starz announced that a second season had been given the green light on July 13th.

As you know if you've been watching, Sweetbitter follows Tess after she moves to New York City spontaneously and randomly finds a job training to be a backwaitress at a high-end restaurant that is, quite frankly, completely out of her league. The world of high-end restaurants turns out to be much more than Tess bargained for. She becomes immersed in the lives of her co-workers, which involves a lot of sex, alcohol, and drugs, naturally. For the most part Tess holds her own, even when (slight spoiler if you're not caught up), one of her newfound friends, Sasha (Daniyar), allegedly tries to kill himself.

One of the most intriguing storylines on Sweetbitter is that between Tess and a bartender, Jake, portrayed by the dashing Tom Sturridge. He is a walking, talking mystery that entrances Tess from the moment she meets him. All six episodes are filled with will-they-won't-they suspense, especially after Jake (another slight spoiler warning), seduces Tess during a group dinner outing and finally asks her out. But then he blows her off, so, we're still stuck in the limbo of will-they-won't-they. Sigh.

No matter what happens in the finale on June 10, which is sure to be just as dramatic as the first five episodes, there will likely be a cliffhanger. The promo for the finale teased a tense interaction between Tess and Simone (Caitlin Fitzgerald), who happens to have a really bizarre relationship with Jake. Are they friends? Are they more than friends? Will we ever know the truth? Who knows, but it's definitely fun to watch.

Speaking of Simone and Jake's relationship, the finale promo also shows Tess being told that she "can't have both of them." Since Tess has been bonding with Simone, who is as impossible to figure out as Jake, it's clear that the relationship triangle is becoming a real issue. Yet another reason why fans will definitely be longing for a resolve, which is unlikely to come in the first season finale.

For those of you haven't read Sweetbitter the novel, it was actually written over a period of seven years by it's author, Stephanie Danler. Though it's not entirely a true story, it is based loosely off of Danler's own personal experience working in a restaurant in New York City, according to Wikipedia. Danler has made it very clear that though inspired by her own life, most of the characters -- especially Jake and Simone -- are purely fictional.

If you've been watching, you may notice a severe lack of modern day necessities like social media, cell phones, and the like. Why is that? Because Sweetbitter takes place approximately 12 years in the past. With the book being released in 2016 and the show premiering in 2018, it's safe to assume we're looking at a 2005/2006-era period piece. Yes, believe it or not there really was a point in time where people, friendships, and life existed without an incessant need for technology. Bizarre, right?