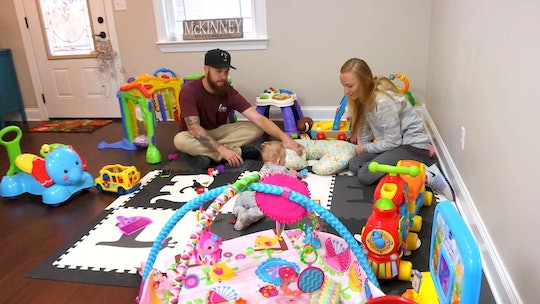 Quite a few changes shook up the cast of Teen Mom OG in its seventh season. After being on the show from the start, Farrah Abraham departed and was replaced with two new young moms: Bristol Palin, whose mother could reportedly see Alaska from her house, and The Challenge veteran Cheyenne Floyd. Amber Portwood also welcomed a son named James. The season finale airs on Dec. 17, which means fans might already be wondering: when does Teen Mom OG return?

More Like This
Kate Winslet Would "Absolutely Love" To Play Her Character In 'Mare Of Easttown' Again
14 Great TV Episodes To Watch With Dad On Father’s Day
Angela Kinsey's Daughter Dressed As Her Character From 'The Office' & Wow, The Sass!
13 Shows For Kids Who Love Princesses

That's a tough one to answer. So far, MTV hasn't announced the premiere date of Season 8. That could be because Season 7 won't be entirely over when "Eye to Eye" concludes. There's still a series of reunion episodes to look forward to, starting on Dec. 24. What better way to celebrate Christmas Eve than to catch up with the Teen Mom crew? MTV's website promises that the reunion will answer all the important questions from previous episodes when Amber, Bristol, Cheyenne, Maci McKinney, and Catelynn Baltierra come together in NYC. They'll share updates about what they've been up to since filming ended, including whether or not Catelynn has decided to separate from husband Tyler. They'll also reveal if Amber has decided to leave the show.

But even though the premiere date of Season 8 hasn't been confirmed, it's possible to theorize about when it will return.

Teen Mom OG started in 2009 as a spinoff of 16 & Pregnant, but despite its lengthy time on the air, there hasn't been much consistency in its schedule. The first season began in December 2009 and ended soon after in January 2010. After that, the seasons tended to begin in spring or summer, though there were still a lot of variables: the second and third season started in July, while Season 4 moved its first episode up to June. Season 5 aired even earlier in March, but Season 6 was pushed all the way back to August. Season 7 was especially long, too, beginning in November 2017 and not officially finishing until now.

That makes it a lot harder to predict when the show will be back for Season 8. It could return in spring of 2019 at the absolute earliest, but based on the last two seasons, summer or even fall seems more probable. It's all speculation until MTV makes their announcement. But there's almost always a good six months or more between seasons, so I wouldn't expect the return of Teen Mom OG until June, at least.

Until then, fans have a few more episodes to look forward to. MTV's summary for "Eye to Eye" states that Catelynn visits Amber, but when she gets home, her trial separation from Tyler begins. Meanwhile, Bristol speaks to a PTSD counselor and Maci talks to Ryan's parents about how to handle things once he's back. Cheyenne and Cory also hook up, which could complicate their co-parenting arrangement.

It seems like the finale will send all five of the women in new directions, which could mean even more changes for Season 8. But hopefully the reunion will tide fans over until the show comes back.