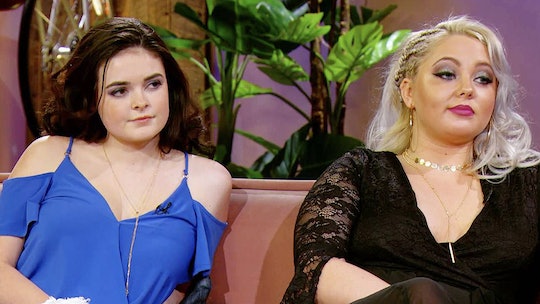 'Teen Mom Young & Pregnant' Season 1 Is Ending With A Bang

TMYP's first season wrapped in June, while the reunion aired on Oct. 15. The way in which MTV splits up its seasons can be confusing because it divides one season into two parts. The season airing now, for example, is still Season 1, even though the first installment of the show wrapped in June. Although this might seem mind-boggling, it makes sense for contract negotiations. Instead of negotiating contract terms every few months or so, producers can delay talks by an entire year based on this schedule.

For everyone's sake here, I'll refer to the current season as Season 1B, which concludes Monday, Dec. 17. The finale episode, titled, "What Comes Next," promises to be drama-filled.

Yep, it's never a dull day in the TMYP universe.

Of course, many fans aren't thrilled to see the show end so soon. Season 1B just premiered on Oct. 15, after all — that's only three months of episodes.

Angela Simmons will host the show, while Dr. Joy Bradford will chat with the ladies about their ups and downs.

If you're wondering about the show's fate after the reunion, rest assured there's a good chance it won't get cancelled.

"The Teen Mom: Young and Pregnant cast has not been notified that the show is ending," a show insider told Radar Online in November. "Stories circulating that the show is cancelled are completely fabricated and untrue at this point."

The source felt compelled to speak out after some cast members members penned cryptic posts on social media.

"Well ladies. Here goes my heartfelt post about what an honor its been to be apart of a tv show with you girls," Ashley Jones wrote on Instagram, according to The Inquisitr. "So grateful that our cast is full of love and understanding, and when times get hard we all reach out. It’s been a long emotional journey. But that’s a wrap. Wouldn’t have done it any other way."

Brianna Jaramillo responded, according to Hollywood Life: "Ladies I am honored to have had the chance to work with you all! You are all amazing mothers and women in general. I hoe this isn’t goodbye but just see you later."

Despite the vague posts, an insider refuted rumors of a cancellation.

"From what the case has been told thus far, the show seems like it is going to be renewed for another season and will likely keep going," the source told Radar Online.