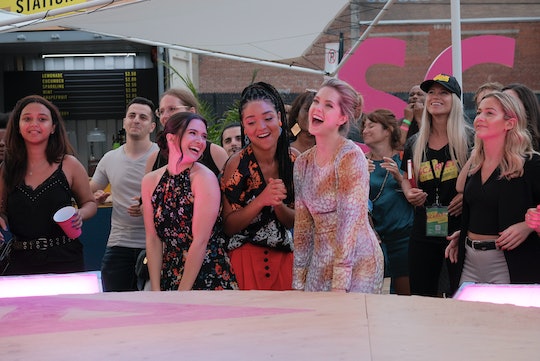 'The Bold Type' Season 3 Is Almost Here & We're Losing It

It's getting warmer out which means the Bold Type is starting soon. Jane (Katie Stevens) and the others left me with questions at the end of Season 2 that have been nagging at me all year. How will she handle having the BRACA gene mutation? Is Sutton (Meghann Fahy) really ready to commit to Richard (Sam Page)? What the heck is going on with Kat (Aisha Dee) and Adena (Nikohl Boosheri)? Other shows are great, but I just want to know when The Bold Type Season 3 premieres so I can get my answers.

If you're with me, take a breath and a sip of iced coffee because there is a date. The Bold Type Season 3 premieres Tuesday Apr. 9 on Freeform, and fans are going to get answers to all of their burning questions. The network recently dropped mini trailers for the four ladies of Scarlet — the fictional, Cosmo-esque magazine where they all work. And that's four women because you didn't think editor-in chief Jacqueline Carlyle (Melora Hardin) would be left out did you? If this small taste is any indication, fans are going to be as exhausted as Sutton is while running with Richard at the end of the season and I'm here for it!

First of all, it looks like Jane is freezing her eggs. It's great long-term planning but she's a writer — inquiring minds want to know how she's going to pay for that. (It's me. My mind wants to know.) Sutton wants to start a new career as a fashion designer on top of starting a new(ish) relationship. I support that as long as she's inclusive because it's hard out there for disabled, curvy girls. Jacquline has to deal with a man running digital at her women's magazine. That's just weird. Hopefully it doesn't last too long.

I saved Kat for last because she might run for office and I'm on the fence about this one. Politics is important and tumultuous right now. Scarlet has never been one to shy away from important issues and neither has Kat. That's probably why the storyline was someone's idea in the first place. I'm just not quite convinced she's ready or even wants to run for office.

In the trailer she says "I went in to volunteer on this campaign for City Council and left as the candidate." Erm — that seems fast. Kat has always been sheltered by her family and only begins to discover her own unique political voice when she starts dating Adena, so perhaps she's being a bit over-eager.

But Dee told Elle at the end of The Bold Type Season 2 that growing up black in Australia made her "hyperaware" of her race. "I grew up in Australia in a town that wasn’t super diverse, so my ethnicity and my Blackness was kind of pointed out to me very often by strangers, by friends, by family," she said. "Anytime I’d get teased at school, [my mom would] tell me that they were just jealous because I come from kings and queens. She told me about the Moors and powerful Black women from history like Pam Grier."

Kat is a queen in her own right and I'm excited to see where her Season 3 journey takes her and her besties next.