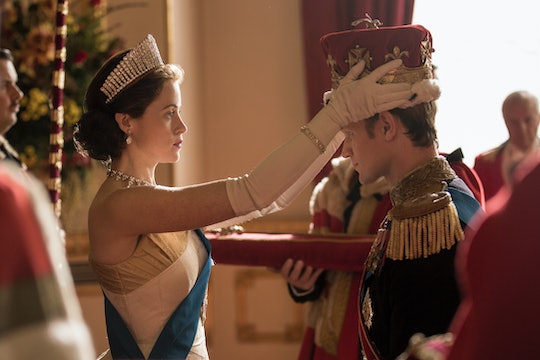 Queen Elizabeth's Journey On 'The Crown' Is Far From Over

The Crown's second season is finally here, but fans are already looking ahead to the future. While it's true that the popular royal drama has yet to be already renewed for another season, fans should feel pretty secure in regards to the future of the show since there's supposed a six-season plan currently in place. However, that still won't keep many from wondering when The Crown Season 3 will premiere.

Unfortunately, there is no official release date at this time since the third season hasn't even begun filming yet. However, based on the releases of the first two seasons (November 2016 and December 2017, respectively), fans probably shouldn't except to see Season 3 until the end of next of year, at the very least. Even so, based on the early reviews of the second season of The Crown, Season 3 will probably be worth the wait as well.

The third season will be a bit different than the first two, though. Claire Foy will be stepping down from her role as Queen Elizabeth and Golden Globe winner Olivia Coleman will be donning the crown for the next two seasons. Because each installment of the series follows about a decade of Elizabeth's life, the show creators decided to get a slightly older actress to play the queen for Seasons 3 and 4. But it's worth noting that Coleman is actually only 10 years older than Foy.

Regardless, Foy, who won a Golden Globe and Screen Actors Guild award for her role as the queen, is leaving the show after this season, as is her co-star Matt Smith, who played Queen Elizabeth's husband, Prince Philip. It hasn't been announced yet who will take on the role of the Duke of Edinburgh for the next two seasons, but Smith told The Guardian that while he'll miss getting to travel for the show, he's ready to move on to his next adventure.

Foy is also more than happy to pass the torch to Coleman and told Variety she'd been secretly "jumping up and down for about three months" prior to when the news was finely announced that Coleman was casted. "I just think she's extraordinary," Foy said about her replacement. "She's an extraordinary human being as well. I just think that she will make it her own. And I just can't wait to see what she does with it."

But before Foy leaves, fans will get to see her one final time in Season 2. While the first season focused primarily on Elizabeth as she was forced to ascend the throne earlier than anyone had anticipated, the second season gives more insight into the lives of royals. Particularly, it looks at the relationship between Elizabeth and Philip, and the struggles they faced throughout the earlier parts of their marriage.

Additionally, the show will also continue to follow Elizabeth's younger sister, Princess Margaret, and her very public romances and scandals. Filled with the same level of drama, gorgeous costumes, and amazing backgrounds as the first season, it's sure to be a spectacular second installment.

It also wouldn't be shocking if Foy once again dominated the next award season. Perhaps before she leaves the show she may even win an Emmy for her performance as the queen. One can certainly hope so; she definitely deserves it. Regardless of any awards Foy may receive in the future, you'll definitely want to watch the second season of The Crown. I guarantee it'll be the only thing people are talking about all weekend.

The Crown Season 2 is currently streaming on Netflix.