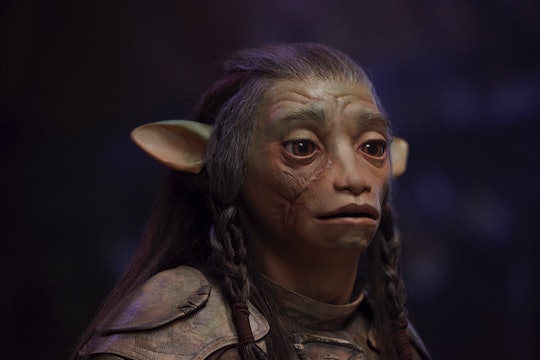 Are You Ready To Introduce Your Kids To 'The Dark Crystal'?

Fantasy characters deserve prequels, too. So Netflix is re-entering one of Jim Henson's lesser-known worlds, Thra. It's the setting of the 1982 critically acclaimed film The Dark Crystal, and home to Skeksis, urRu, Gelfling, and other fantasy creatures fighting for power within the land. So, when does The Dark Crystal premiere? You can journey to Thra at the end of the month. But while you wait, let me catch you up on the history of this universe. Even if you're a fan of the critically-acclaimed cult hit, it's been a long time since 1982.

The full title of Netflix's new prequel TV series is The Dark Crystal: Age of Resistance and you can begin streaming it on Aug. 30. I grew up with Henson's Miss Piggy and Kermit, but I'm less familiar with the creatures who live in Thra. I wanted to learn everything I could about the show before the series premiere so I could pass it on to potential new fans, because it's always fun to escape to new worlds.

The show follows three Gelfling named Rian (Taron Egerton,) Brea (Anya Taylor-Joy,) and Deet (Nathalie Emmanuel) as they "discover the horrifying secret behind the Skeksis’ power" and "set out on an epic journey to ignite the fires of rebellion and save their world," according to Netflix's press description. That's a simple enough premise. Skeksis are bad and Gelfling are good, so obviously if the bad guys are in power the good guys need to save the world.

Mythical worlds have such a rich history that you have to watch to understand it all, but I can tell you that one of the most magical aspects of this live-action series is that it features no humans in front of the camera. All of the action work on set was done by puppeteers. The actors in the film do voice work in the studio.

That means that the actors of The Dark Crystal series had an entirely unique experience while making the episodes. "It's a very interesting process and it's been very, very challenging in a good way," Simon Pegg, who plays a creature named Chamberlain, said in a behind-the-scenes video for Netflix. "Because usually when you do a voice in something — if you do animation — you do the voice and then the animators take your voice and they animate to the voice. With this it's the other way around. You have to match your performance to the puppeteer's....you have to match their mouth flaps."

The idea to use puppeteers came from Cindy Holland, Vice President of Original content at Netflix. "....I thought, 'well the mythology is great, but what makes it really special and transcendent is the puppets," she said in the video. "The best version of The Dark Crystal that could be made today would be by the Henson Company, by giving them the freedom to really reach for the best version they can possibly imagine," she continued.

That version includes 90 different sets, 180 puppets, and 10,000 lines of dialogue according to The New York Times. Some of the most famous names include Mark Hamill, Helena Bonham Carter, Andy Samberg, and Keagan-Michael Key. “It’s the biggest puppet production ever mounted,” Lisa Henson, chief executive of her father Jim's entertainment company told the Times. Who better than his daughter to lead his company through producing another chapter of what is Jim Henson's "proudest achievement" of them all.

The Dark Crystal: Age of Resistance premieres on Netflix Aug. 30.