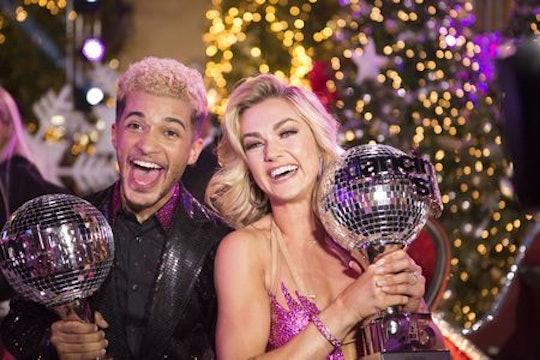 With the 25th season of Dancing with the Stars now at an end, fans just want to know when to expect more celebrities in the ballroom. But this spring, things won't be following the same schedule as always. ABC will introduce a new spin-off of the show instead of the regular season. So when does the DWTS athletes edition premiere? There has been no official announcement about the premiere date for the show, but as a Dancing with the Stars aficionado, I think I can make a fairly educated guess as to what can be expected. Then again, everything is different this time around.

In the final seconds of the Dancing with the Stars Season 25 premiere, host Tom Bergeron announced that the spring would see a mini spin-off version of the reality series, featuring only athletes. This "mini" season is set to last a total of four weeks and include 10 competitors unlike the usual 10 weeks and more than twice as many competitors. The announcement on the show confirmed a few cryptic tweets from Bergeron the day before, teasing a "bite-sized" spin-off in the spring that was not Dancing with the Stars Junior. But don't you worry dancing fans, the regular-sized full Season 26 of Dancing with the Stars will be back with a vengeance in the fall of 2018.

If this were an ordinary season of Dancing with the Stars and you were to ask me when the spring season was to air, I would answer with a great deal of confidence that it would probably be Monday, March 19, 2018 — though, again, no official announcement has been made. The most recent spring seasons of the show — including seasons 18, 20, 22, and 24 — have all premiered near the 20th of March, and this spring the Monday closest to that date falls on the 19th. But because this is no ordinary season of Dancing with the Stars, it being much shorter than usual, it's possible the air date could be switched around as well.

Could it be that the spin-off will air later than usual due to an unusually bloated ABC reality schedule this winter? Perhaps! The network announced in the fall that they would be airing yet another spin-off of The Bachelor called Bachelor: Winter Games. The Winter Games edition will include contestants from all franchises around the world, winter sports, competition, the possibility of love, and probably a jacuzzi. It will air at the same time as the 2018 Olympics in February of that year. Which, by the way, means that it will overlap somewhat with The Bachelor starring Arie Luyendyk Jr.

It is unclear just yet how much ABCs winter of love and athleticism will impact the all-athletes edition of Dancing with the Stars, particularly with regards to the premiere date. It is possible that the show won't begin until April or even May. Luckily, with all of the programming ABC has lined up, it's doubtful you'll be bored while waiting for the dance competition show to come back to TV.

While I'm sad that this edition of the show is going to be shorter than ever (and tragically short on '90s boy band icons), I'm still eagerly awaiting the announcement for who's going to be a part of the cast. Colin Kaepernick is reportedly in the running, which would make me extremely happy as he is one of the few professional athletes that I would recognize if I saw him on the street. Whoever is part of this new season and whenever it starts, however, we've got a lot of The Bachelor to watch before we get there.