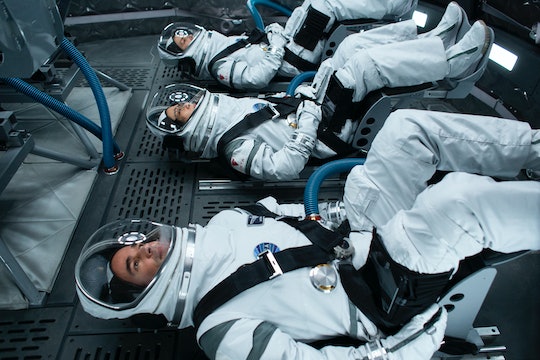 Hulu Series 'The First' Plans A Trip To Mars

The upcoming Hulu series The First steps neatly into the near future to explore the possibility of humans landing on Mars. Starring Sean Penn and Natascha McElhone, the show is set to premiere on Sept. 14. But even though it's set in a time more technologically advanced than our own, the world in the trailer still feels familiar enough to be current. So when does The First take place?

It's difficult to pinpoint just from the promo. All of the characters dress in normal modern clothes and live in regular (but very nice) homes; there are no flying cars like The Jetsons and no wacky futuristic fashion to be seen. The only indication at all that it's not set in the present day is that it's about humans setting foot on Mars, which is something that hasn't happened yet. Subtract the space travel and there's nothing that visually places the show decades ahead of now.

But according to a review from Rolling Stone, the Hulu series is set in the early 2030s. That means that the future depicted in The First is incredibly close to the present, taking place a mere 12 to 15 years from now. It presents the hypothesis that planning an 18 month stay on Mars is less than 20 years away.

The New York Times reported that there were more signs of the future in the show than the trailer let on. In addition to making plans to go to Mars, The First features "reliable self-driving cars, augmented reality and Google Glass-ish personal communication hubs." But it's the kind of future that could feel within the audience's grasp because it's still recognizable. In fact, it takes place in New Orleans, where a few landmarks inspired creator Beau Willimon as he wrote the series.

The art space, the Pearl, inspired one scene, while Willimon found the protagonist's house by chance when he was in Bywater. "Everything started to click," he told the NY Times. "It suddenly became Tom Hagerty’s house almost instantly, and I started writing to the architecture." Details like that serve to make the show's near future feel even closer, because they're locations that belong to 2018 as much as the fictionalized 2030s.

But how realistic is The First's goal to get to Mars within the next decade or so? In 2016, then-president Barack Obama wrote a piece for CNN in which he said, "We have set a clear goal vital to the next chapter of America's story in space: sending humans to Mars by the 2030s and returning them safely to Earth, with the ultimate ambition to one day remain there for an extended time." The First made that plan happen, but it's less certain whether it's actually a plausible turn of events in the real world.

Shortly after Obama's article was published, the New York Times noted that taking a trip to Mars was possible, but it wasn't without risk of radiation and it would take a lot of time. It would also be very expensive, with Vox estimating that such a journey could cost around $500 billion. The publication stated that William H. Gerstenmaier, NASA's associate administrator for human exploration and operations, said at the International Astronautical Congress meeting that astronauts could orbit Mars in the 2030s. Being able to land, however, would likely have to wait until the 2040s.

If progress moves along at a brisk pace over the next decade with a sufficient amount of funding made available to NASA, perhaps The First could be something of a prequel to real life. But until then, it remains a fictional imagining of one potential future.