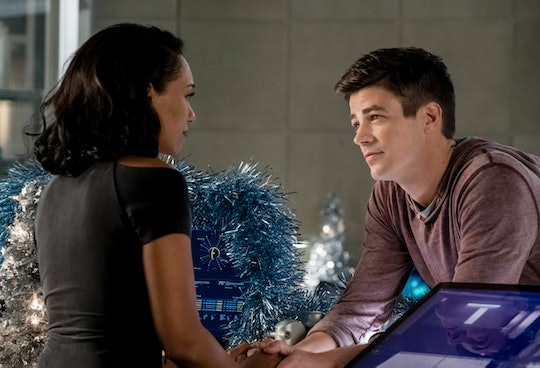 Here's When You Can Expect 'The Flash' To Return

DeVoe returns in the midseason finale of The Flash and it looks like he has a lot in store for Barry. After giving Mr. Allen a reprieve so he could marry Iris (although that ended up going south for a totally different reason), DeVoe is back to finish what he started... whatever that is. Whether or not he succeeds in his plans, you can probably expect the episode to end on a cliffhanger, which means you may want to know when The Flash will return from its winter hiatus. Thankfully, it won't be too long of a break to go without Barry & Co., but depending on what happens in Tuesday night's episode, you may still be a bit impatient to find out what happens next.

But regardless of what goes down, you can mark Tuesday, Jan. 16 on your calendar as the day that The Flash returns to The CW. What will happen in the back half of this season obviously depends on what happens during the midseason finale, but there are a few things that are already known about what lies in store for our favorite Central City characters. First, if you watched the Crisis on Earth-X crossover event then you may remember a very brief moment in which a waitress approached Barry and reminded him to say, "I do." If you thought that was a suspicious interaction, you were 100 percent correct.

There are a number of theories floating around about who the waitress could be, but pretty much everyone agrees she has to be one of Barry and Iris' descendants from the future. The top two guesses are she's either their daughter, Dawn Allen, or Dawn's daughter, Jenni Ognats, who's part of the Legion of Super-Heroes, which has recently been mentioned on Supergirl. Both women are speedsters like Barry, so they certainly have the ability to go back in time just like he does. Regardless of who she is specifically, TVLine has confirmed that she will be back later on this season, which means she probably has a much bigger role to play on the show.

Also dropping in for the second half of the season is WWE star Bill Goldberg. The wrestler revealed the news on Twitter last month and also shared that he'll be appearing in two episodes, though it's unclear who he'll be playing. If I had to guess, I'd say he's one of the other mutants DeVoe purposefully created, or he's just another general villain who will serve as a side plot. Somehow I doubt Goldberg's character will be joining Team Flash.

So there's already a lot to look forward to on The Flash next year. But before the show even gets to that, it has to get through the midseason finale and the stakes are very high in this one. DeVoe, also known as The Thinker, finally puts his plans into motion by kidnapping Barry and locking him in a speedster prison. At the same time, Caitlin's old boss, Amunet, kidnaps Caitlin and puts her in meta-dampner cuffs so she can't turn into Killer Frost. Amunet needs Caitlin to perform a tricky medical task and if she fails Amunet will kill her. Though Team Flash is good, with two of their teammates out for the count, Iris has to decide which one they'll save. This is definitely not the way Iris and Barry probably planned on spending their first Christmas as a married couple together.

Despite the major predicament, Team Flash has been through a lot and I'm confident they'll somehow figure this out too. You can see how everything plays out when the midseason finale of The Flash airs Tuesday night on The CW at 8 p.m. EST.