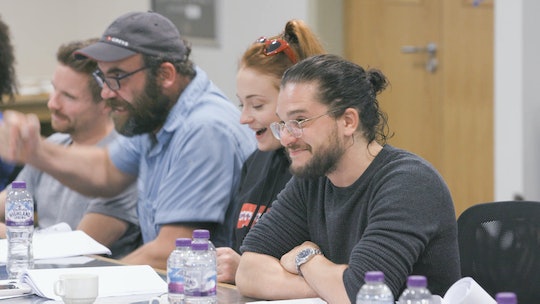 'Game Of Thrones: The Last Watch' Is Taking Fans Behind The Scenes

Whether you loved it or hated it, the series finale of Game of Thrones marked the end of a TV era. The record-breaking show was on the air for eight seasons, and in that time, it managed to become one of the most popular TV shows ever made. Now, HBO is giving fans a behind-the-scenes look into the show with cast interviews and special moments on set. So, when does the Game of Thrones documentary air?

The special, titled Game of Thrones: The Last Watch, will air on Sunday, May 26 at 9 p.m. ET on HBO. You can watch the documentary as it airs live on your cable service’s HBO channel, and if you’re watching on a computer or mobile device, you can turn to HBO Now or HBO Go to stream it.

According to HBO, the two-hour documentary will give fans unprecedented access to the production, crew, and cast of the series as it chronicles the creation of Season 8. “Game of Thrones: The Last Watch delves deep into the mud and blood to reveal the tears and triumphs involved in the challenge of bringing the fantasy world of Westeros to life in the very real studios, fields and car-parks of Northern Ireland,” reads the HBO synopsis. “Much more than a ‘making of’ documentary, this is a funny, heartbreaking story, told with wit and intimacy, about the bittersweet pleasures of what it means to create a world – and then have to say goodbye to it.”

The documentary comes from acclaimed British filmmaker Jeanie Finlay, who embedded herself on set for year to document the key moments that contributed to making this ambitious and complicated final season. On Twitter, the director took the opportunity to promote the project, and she outlined the emotional journey she captured for fans.

“#TheLastWatch is coming,” Finlay tweeted. “Tune in wherever you watch #GOT and see the documentary I made while embedded on the final season of @GameOfThrones. The joy of meeting brilliant, funny people and the sadness of saying goodbye. My baptism of Ice and Fire.”

In the trailer for the documentary, you can see the cast and crew preparing for the last season of their nine-year run. “This is strange,” showrunner D.B. Weiss says to the cast, including an emotional Kit Harington. “Here we are at the last table reading. It’s like looking around and seeing your family.”

You can also see some of the cast’s last shots on set, including Emilia Clarke’s final emotional scenes. At the end of the trailer, Game of Thrones director David Nutter — who directed “The Rains of Castamere” and Season 8’s first episode, “Winterfell” — gets sentimental, calling his time on working on the series a “dream” while revealing that the show saved his life.

No matter what you felt about Season 8, you have to admit it will be interesting to see the cast and crew’s behind-the-scenes interactions and relationships. And if nothing else, you’ll get a final chance to say goodbye to a show that’s been a part of your life for so many years.