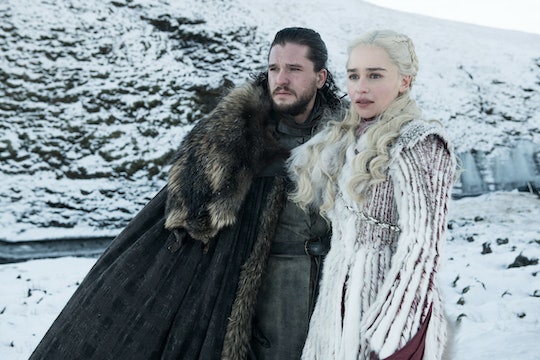 The 'Game Of Thrones' Prequel Starts Shooting This Summer

Game of Thrones is on the cusp of its final season premiere, but fans who are carefully rationing their excitement may be dying to know when the Game of Thrones prequel premieres. It's going to be a while, but if you're a fan of the flagship series, then you were probably expecting that. Entertainment Weekly was able to confirm that the as-of-yet-untitled prequel will begin filming in the summer of 2019. Assuming the series is greenlit and HBO orders more episodes, that would put a premiere date somewhere in late 2020 at the very earliest, but more likely sometime in 2021. (And let's be honest, it would be unthinkable for the network not to pick up the show.)

George R. R. Martin is reported to be working closely with the new series' showrunner, X-Men First Class' Jane Goldman, but he's already aroused the ire of HBO's head honchos by revealing too much information. In November of last year, he issued an apology on his blog for speaking too soon on the rumored title of the series. "HBO has informed me that the Jane Goldman pilot is not (yet) titled The Long Night," he wrote. "That’s is certainly the title I prefer, but for the moment the pilot is still officially Untitled. So…mea culpa, mea culpa, mea culpa."

The Long Night is a reference to the last long winter suffered in Westeros, and it gives a huge hint about possible settings and storylines when virtually no information about the show has been revealed yet. HBO's official synopsis of the show reads:

Taking place thousands of years before the events of Game of Thrones, the series chronicles the world’s descent from the golden Age of Heroes into its darkest hour. And only one thing is for sure: From the horrifying secrets of Westeros’ history to the true origin of the White Walkers, the mysteries of the East, to the Starks of legend…it’s not the story we think we know.

Martin has revealed (presumably with HBO's consent) that the prequel will take place about 5000 years before the events depicted in Game of Thrones. That places us roughly in the time period when the First Men inhabited the continent alongside the Children of the Forest, who created the first White Walkers to protect them from the war-inclined humans. But White Walkers soon escaped their control and turned on them, kicking off the Long Night. Fans have seen bits and pieces of this story told on Game of Thrones through Bran's flashbacks as the Three-Eyed Raven. But presumably, the prequel will take us much deeper into this oral history.

Martin confirmed of the time period in an Entertainment Weekly interview last November:

Westeros is a very different place. There’s no King’s Landing. There’s no Iron Throne. There are no Targaryens — Valyria has hardly begun to rise yet with its dragons and the great empire that it built. We’re dealing with a different and older world and hopefully that will be part of the fun of the series.

He also expressed a great deal of enthusiasm for the prequel's new showrunner, calling Jane Goldman "a tremendous talent." Fans may have a long time to wait before the new series premieres, but isn't eagerly slurping up the slow trickle of new details part of the fun? Meanwhile, the final season of Game of Thrones is currently airing on HBO.