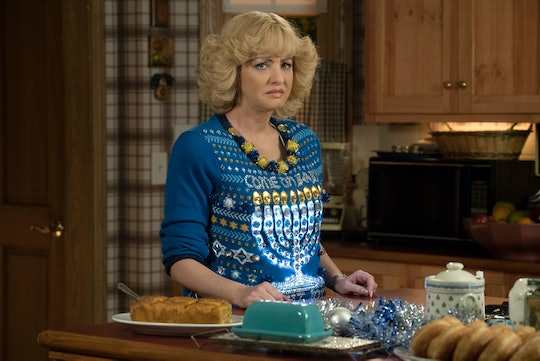 'The Goldbergs' Won't Be Gone From Our TVs For Too Long

It’s easy to understand why some of the hour-long primetime dramas need to take a couple of months off in the middle of the season, but these days, that hiatus extends to the comedies of evening TV as well, including the legitimately funny sitcom, The Goldbergs. The period comedy takes place in "1980-something" each week and never manages to play itself out with the nostalgia. But when does The Goldbergs return from its winter hiatus?

Although there hasn’t yet been an announcement about the exact return date, looking at previous seasons of The Goldbergs will tell you that it will likely return at the beginning of January 2018. Or, to be more exact, it will more than likely premiere the second half of Season 5 on Jan. 3, which is the first Wednesday after New Year’s Day.

For all of the past seasons of The Goldbergs, that’s when the winter hiatus has ended, so there’s no reason to assume that the same won’t apply for the most recent season. And as a whole, it could be a lot worse, with the two or three month break that some TV shows endure after their midseason finales, so if you’re worried about when The Goldbergs returns from its winter hiatus, just know that it could be a lot worse.

If you initially started watching The Goldbergs for strictly its comedic value, you might have been, like me, caught off guard when the sentimental and heartwarming moments started to be thrown in here and there, and then more so with each episode. But for The Goldbergs, it definitely works and it’s made the semi-autobiographical comedy the success that is today. In fact, when it was renewed for Season 5 back in May, it was also renewed for its sixth season at the same time, proving just how much faith ABC has in the show.

Much like previous season, Season 5 of The Goldbergs has proven to have that same quality of genuine comedy mixed with random bursts of more grounded, serious moments, like when Beverly finally said goodbye to Erica at college or when Barry witnessed Murray giving his sometimes deadbeat brother money to help him out. If you haven’t gotten a little misty-eyed at least once with The Goldbergs, then you’re basically just made of stone.

Due to the show’s quick success, it’s kind of surprising that The Goldbergs return date hasn’t yet been announced, but given that all four of the show’s previous seasons have ended around this time in December and picked back up after the new year in January, it’s almost a given that Season 5 will follow the same pattern. Since it’s most definitely not a drama, though, you can expect some of the usual hijinks to end the first half of the season when the Goldberg family celebrates the first night of Hanukkah.

Cory Lorenzen, the production designer for The Goldbergs, spoke to Entertainment Weekly about the fall finale episode and revealed that in true Beverly fashion, the Goldberg matriarch will go all out for the holiday as only she can. At this point, I’m here just for the overabundance of garland and tinsel, but that’s just me. "With the Goldbergs' house you always do as much as you think is right and then you want to double it because you’re trying to pump up whatever Beverly is trying to do," Lorenzen revealed. "Here, she’s overcompensating for her celebration of Hanukkah so we get to go a little crazy with it."

Since it’s more of a comedy than serious drama, there aren’t many clues on what we can look forward to when The Goldbergs returns in January, but by now, I think it’s safe to say that whatever they do is going to be comedic gold.