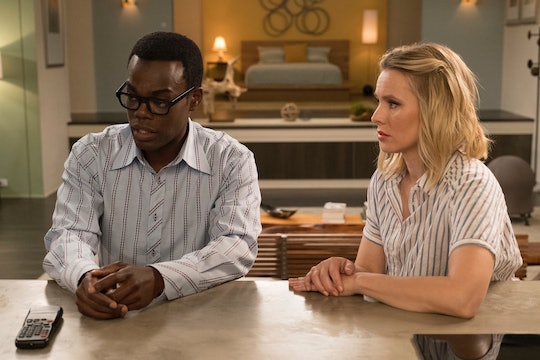 'The Good Place' Won't Be Back For Quite Some Time

In its second season, The Good Place has only gotten greater and greater. Which means that all fans of the show will be pretty crushed to find that it has officially started its winter hiatus, and won't be back for some time. So when does The Good Place return, you ask? Not to worry friends, you haven't been sent to The Bad Place. The show will be coming back to your TV in just a few months, once you've gotten all the holiday fun you can possibly stand.

If you, like me, are an avid TV watcher, then you will probably be aware that most network shows go on a winter hiatus around Thanksgiving time or just before the holidays. These shows then pick up again after the holidays, when everyone is full on turkey and pie and, in my case, about 500 of these little powdered sugar-covered cookies my mom makes every Christmas. The break leaves you ready to settle back down into the decidedly less jolly routine of every day life. Personally, I am still a little unclear on why TV series tend to go on hiatus at this time of year to begin with. From my not-at-all-scientific research, I have gathered that it all comes down to — you guessed it — money.

Generally, networks like to put out their best material when their ratings are likely to be highest. One can easily assume that TV ratings aren't that great during the holiday seasons, probably because everyone is busy going to yet another office holiday party, and so spend less time in front of their TVs (I am not one of these people). The precise timing and lengths of these hiatuses change of course, depending on the show as well as their particular needs and competitors. Not to worry though — The Good Place is hardly gone for good.

The midseason finale of The Good Place Season 2 saw most of the characters taking major strides in their individual journeys toward being actual humans and not, you know, the worst. But it also left viewers with some very big questions that are going to need answers very soon. After finding out they were in love in one of Michael's old version of The Good Place, things remain very much unresolved between Eleanor and Chidi, now rapidly approaching will-they-or-won't-they territory.

Even more ominously, Michael, fresh from his morality pep-talk with Eleanor, walked into his office to find Shawn waiting for him. Shawn, you will remember, is Michael's demon boss who is basically just waiting for his experiment to fail so that he can fire Michael and have The Bad Place revert back to the way things used to be. Earlier in the final episode, Michael exclaimed that everyone has come too far to just wipe their memories away again and I agree. I'm a little worried about what Shawn has found out about the Good/Bad Place, and whether it's about to spell disaster for the (anti)heroes of the show.

So when can we expect to get another dose of these Good Place antics? Luckily for you, NBC has just released its winter premiere dates and The Good Place just so happens to be on the list. The series will make its grand return on Thursday, Jan. 4 at 8:30 p.m. ET, just ahead of Will & Grace. I'm sure we can all survive such a brief hiatus, right? What I'm not so sure of, however, is how everything is going to turn out in the afterlife.