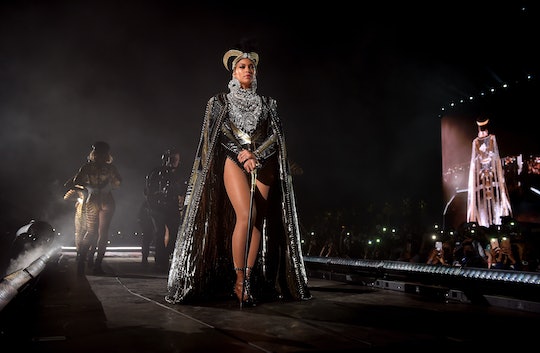 Queen Bey Takes Netflix By Storm In 'Homecoming: A Film By Beyonce'

If you missed out on Beyoncé's 2018 Coachella performance (or its live stream), then you might have been waiting to see it ever since. And your luck is about the change. The entire performance is coming to Netflix in a new documentary that combines it with all kinds of behind the scenes footage. Since you're going to want to add it to your Netflix queue ASAP, I'll answer the question you must be asking: when does the Homecoming: A Film by Beyoncé movie premiere?

The documentary will be available on Netflix on Apr. 17. That's actually perfectly on theme, because it lands right in between the two weekends of Coachella 2019. If you're feeling nostalgic for festivals of years past, then it'll be the perfect thing to complete this year's Coachella celebrations. And if you're rather skip the outside-in-a-field aspect of listening to music, then you can happily enjoy the entire Beyoncé spectacular from your cozy couch. I know that's where I'll be.

It seems like Homecoming has been in the works for a while. It's been almost a year since Beyoncé's performance, but the cameras appear to have been following her long before that. The official summary boasts that the doc will reveal "the emotional road from creative concept to cultural movement," so filming must have begun before Beyoncé took to the stage.

Netflix revealed the documentary's premiere date on Twitter on Apr. 7, but a trailer followed shortly after. While it won't be the same experience as standing in the crowd watching Beyoncé kill the game from a short distance away, it might offer you a hint of how being there felt. The grainy footage of the crowd gives viewers a sense of the scale of the production, while the crisp quality of the show itself makes sure you don't miss a moment. You can admire every dance move with complete clarity.

But while the performance is the biggest draw, the supplemental material is compelling too. The trailer only contains snippets here and there, but they're promising. Fans will be able to see what it was like to rehearse for Coachella, with Beyoncé observing her dancers and musicians as they practice, then cheering them on for a job well done. You might start to recognize the people in Beyoncé's team as they get ready, pal around, and prepare for such a massive showcase.

Even Blue Ivy makes an appearance, as do twins Rumi and Sir. Blue Ivy can be spotted dancing, sitting front and center in a chair ahead of her mom during rehearsal. Then there's a quick glimpse of both Rumi and Sir in their mom's arms, everyone looking cute and casual. Not only does Homecoming take a look at Beyoncé's creative process, but also lets fans into her personal life a little. But as the subtitle A Film by Beyoncé makes clear, it's totally on her terms.

Members of the Beyhive probably already have time carved out in their schedules for Homecoming, but now that you know when to expect it, you can get ready for the occasion, too.