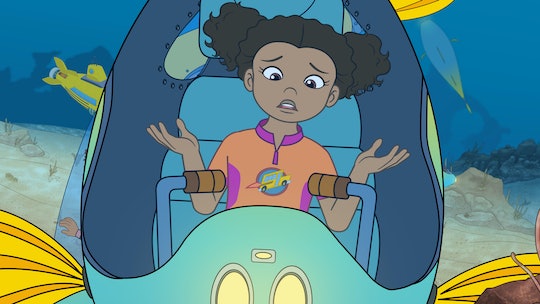 People just cannot get enough the Netflix reboot of the Magic School Bus, and it's hard not to blame them. So now that your kid has watched all of Season 2 about 16,000 times, when does The Magic School Bus Rides Again Season 3 premiere? Because as much as you may adore Ms. Frizzle's sister and the kids, there are only so many times you can watch the same show over and over again.

Well, you might have to wait a little bit. Season 2 only premiered on Friday, April 13, so it's way too early for an announcement about another season, but it's likely coming. Netflix doesn't release its ratings, which is normally what television networks go off of when they make a decision about renewing a show or not. Then again, Netflix isn't a normal television network, and since it runs on subscriptions and not ads, it can renew whatever it wants. Which is usually what happens.

To be honest, some of the reviews about the first season of the Magic School Bus Rides Again weren't all that great, but that was mainly because '90s kids hate seeing their favorite shows remade. But personally, I think it's still a fun remake that can prove to be both fun and educational for kids, which is always a good thing.

Still, Netflix knows that if it produces it, people will come. This year, CNBC reported that Netflix spent $8 billion on new shows and about $2 billion on marketing, even though most of its shows get popular because of word of mouth. CEO Reed Hastings said of its plan:

Our sort of Holy Grail dream is that the service was so good at promoting the new content in such relevant ways that we wouldn't have to spend externally.

Which is exactly what happens and why it will likely make another season of the Magic School Bus Rides Again. The first season premiered back in September and it's only just April now, so the streaming service moves pretty fast in regards to churning new seasons out. Although, the reboot was first announced back in 2014, but now that it's been made, expect to see more.

It really is super cute, no matter what your inner hater says. The cartoon follows Fiona Frizzle, voiced by Kate McKinnon, who heads up the magic bus to take kids on adventures. The original Ms. Frizzle has moved up in the world and is now a professor, voiced by Lily Tomlin, who provides some guidance now and again. I mean, you have to love it if only because it shows women breaking some glass ceilings, right? The theme song has the same lyrics as the original, but was composed by Lin-Manuel Miranda and has more of an electronic sound. Yes, it's catchy AF, so prepare to be singing it all summer long.

The reboot takes a lot of cues from the original, like the tagline, "Ok, bus, do your stuff" and the cast of characters is pretty diverse. But now, they also incorporate some technology like phones, selfies, and they even took a trip across the world wide web. So the only delay in getting another season out and onto your kid's iPad might just have to do with the writing team coming up with even wilder adventures for the curious crew.

Surely, they'll come up with something. Hopefully soon, because there are only so many times you can watch your kids favorite shows.