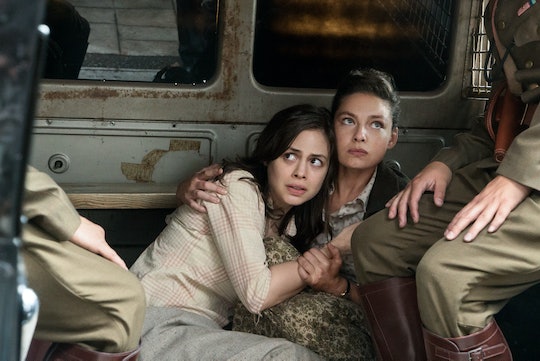 The ten-episode second season of Man in the High Castle premiered all at once back in December 2016, so it's been quite a while since fans of the show have had anything new to look forward to. In today's TV landscape when people gobble entire ten-episode seasons of TV in a single marathon streaming session, two years is an awfully long time to wait to find out what happens next.

But even if Man in the High Castle fans paced themselves a little bit, ten episodes can go by quickly, and there's a very good chance most viewers watched all of them long ago. But their patience has nearly paid off, because The Man in the High Castle returns just in time for Halloween. Though this show's spook-factor has nothing to do with goblins or ghosts.

The Man in the High Castle, Season 3 is back Oct. 5 NME reported. I just hope you've had a chance to re-watch the earlier seasons, or look up recaps to make sure you haven't forgotten all the action that came before.

Amazon announced at San Diego Comic-Con in July that The Man in the High Castle would premiere Oct. 5, but it also announced that the show will be returning for a fourth season as well, according to The Hollywood Reporter. The show is pretty popular, so it wasn't a huge surprise that it was renewed, though fans are still very jazzed.

The end of the second season of Man in the High Castle had some surprises, including Lem showing up at Tagomi’s door with a bunch of films, and the revelation that Trudy is probably still alive. And based on the trailer for Season 3 alone, it looks like the next season is in for some interesting storylines.

Resistance fighters are reorganizing, and there are apparently some science fiction twists in the third season of the show, if the promo and early reviews are to be believed. "Season 3 devotes significantly more time to exploring the series’ multiverse," The Verge reported, "where some people can travel between different worlds that are mostly defined by which faction won World War II." That's got to be pretty intriguing to any fans of the show who have been waiting with bated breath to see which direction the series would go in next.

I don't know what's coming next for this dystopia, but you had better believe I'm excited to find out.