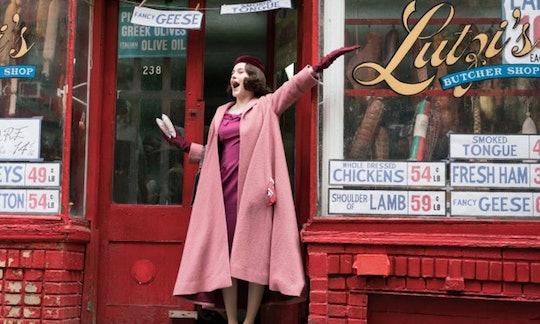 Though many streaming services will drop a brand new series all at once and others will dole it out episode by episode, Amazon has a different way of going about things. They'll release a single episode to see how much interest it can generate before picking up a show to series, which is what they did with Amy Sherman-Palladino's upcoming project. Her new show resulted in so much buzz that it received a full season order. Now the official trailer for The Marvelous Mrs. Maisel is here, and it sums up what happened so far in the series while setting the stage for what's to come.

Set in the 1950s, The Marvelous Mrs. Maisel followed happy housewife Miriam "Midge" Maisel as her entire life fell apart. It seemed like she had everything she could possibly want until the day her husband Joel, a struggling comedian, abruptly left her and their children. But all was not lost: the resultant emotional downward spiral led Midge to discover her true calling. Right after her husband broke the news of his affair to her, Midge took herself down to the East Village comedy club where Joel used to perform and got on stage. Her improvised set killed with the crowd, but also got Midge arrested on indecency charges.

But Midge didn't let that get her down, because she had found something that she had a real talent for. The pilot ended with her preparing to embark on her new comedy career and on November 29 interested viewers will be able to see if she finds success.

Much of the trailer rehashes the pilot, but it does provide glimpses of where the upcoming episodes will take Midge's story. She's spotted alongside bartender friend Susie, who had volunteered to help Midge hone her act. She continues to deal with her family at what promises to be an eventful dinner — especially because difficult family dinners are a Sherman-Palladino trademark. Plus Midge's trouble with the law is far from over, as the trailer reveals her getting arrested yet again and arguing out her charges in court. That's only a small portion of what's sure to come for Midge.

In an interview with Vanity Fair, Sherman-Palladino explained that inspiration for the show came from her own life, in a way. Though the show isn't inspired by or based on any particular comedian, it's still exploring a real time and place. Comedy was also an important part of Sherman-Palladino's childhood because her dad was a stand-up comedian. "So I grew up with a bunch of Jews sitting around trying to make each other laugh," she said. "And I knew Lenny Bruce's mother when I was a kid because she was sort of the godmother to all the comics. And I worked at the Comedy Store. So the show was not so much a conscious homage to any particular comic as it was something that was in my zeitgeist."

The fast comedy of The Marvelous Mrs. Maisel (and its charismatic, quippy brunette heroine) will most definitely call to mind Gilmore Girls, while the era the show is set in already has critics namedropping Mad Men. But while shades of other beloved series can be seen, Mrs. Maisel is ultimately neither. It's its own show with its own unique story and point of view. The f-bombs and nudity would never have had a place in Stars Hollow, and its throwback New York City focuses on different neighborhoods than the ones Don Draper haunted.

Still, those that adored Sherman-Palladino's past works and miss the look of mid-century modern will likely find something to love about The Marvelous Mrs. Maisel.