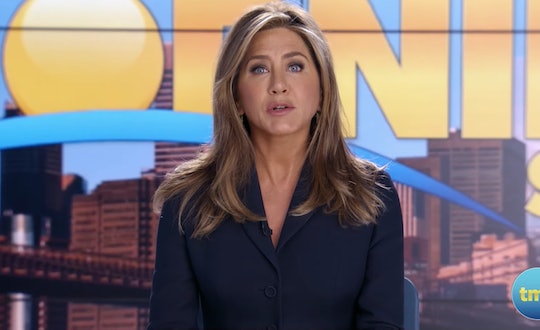 Jennifer Aniston Fights For Her Job In 'The Morning Show' Trailer

Apple is officially jumping into the ring to join the fight for the title of "Best Streaming Service." The platform did so by dropping the first trailer for it's highly anticipated scripted drama, The Morning Show, which is filled with a star-studded cast and set to premiere on the upcoming streaming service, Apple TV+. But, when does The Morning Show premiere on Apple TV+? That's the question many fans are asking now that they've seen the intense first look, and once you watch it for yourself you'll be asking the same thing.

The Morning Show brings Jennifer Aniston, Reese Witherspoon, and Steve Carrell together for a story that almost seems as if it's been ripped from real-life headlines. As the trailer unveils, Aniston's character, a lead news anchor on The Morning Show, is left to face the cameras alone after her co-anchor, played by Carrell, is fired due to unknown "allegations." Unfortunately for Aniston's character, the behind-the-scenes trouble doesn't end there as her entire career appears to be brought into question.

"Her sell-by date expired years ago," a male character in the the trailer states as Aniston is shown looking at herself in the mirror. "I want you to start grooming some new people." In comes Witherspoon's character, who seems to want absolutely nothing to do with being a morning news anchor.

Here's the official synopsis for The Morning Show, as told by Apple TV+ via a press release sent to Romper:

The Morning Show explores the high-stakes world of morning news and the lives of the people who help America wake up in the morning. Told through the lens of two complicated women working to navigate the mine field of high-powered jobs while facing crises in both their personal and professional lives, The Morning Show explores ego, ambition and the misguided search for power.

What is most interesting about the scripted drama is that both Aniston and Witherspoon are named as Executive Producers. This isn't the first time the A-listers have worked together, as many diehard Friends fans will remember. Witherspoon played Jill Green, sister to Aniston's Rachel Green, on the hit series, though she only appeared in two episodes in February 2000.

Now the two former on-screen sisters are working as potential rivals. At one point in the trailer Witherspoon's character tells Aniston's she isn't interested in taking her job, to which Aniston's character instantly calls "bullsh-t."

Apple TV+ is the company's response to other wildly popular streaming services such as Netflix, Hulu, and the eagerly awaited Disney Plus. The service will be ad-free, according to Digital Trends, with content available both on and offline. It's also been reported that Apple TV+ will be unveiling several original series and films on the streaming service in hopes of enticing subscribers to sign on. So far, aside from The Morning Show, a multi-project deal with Oprah Winfrey has been reported, as well as a drama called See starring Aquaman's Jason Momoa. For family-friendly content, a series called Helpsters created by the Sesame Workshop will also be launching on the streaming platform, as reported by Deadline in March 2019.

Unfortunately, an exact premiere date has yet to be confirmed by Apple TV+. For now, excited fans can hold onto their anticipation while waiting for The Morning Show to premiere on Apple TV+ in fall 2019. Stay tuned for more updates on the original series as Apple continues to unveil them.