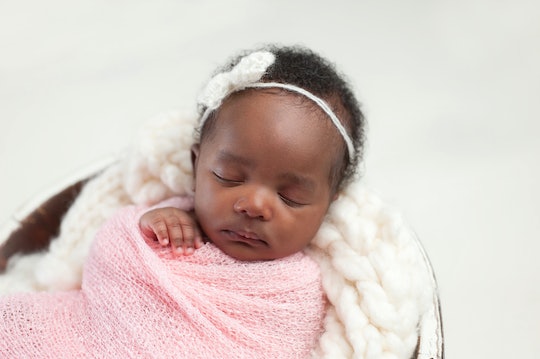 When The Moro Reflex Goes Away, According To Experts

It's scary to watch your newborn baby startle so suddenly, and with such force, that their little arms flail out like they've just seen a ghost. The good news, thankfully, is that the sudden startle a baby usually experiences with when they're sleeping is normal. It also has a name: the Moro reflex. Not only is it normal, but it won't last forever, either. So, when does the Moro reflex go away? After all, swaddling is hard as hell (honestly, how do those nurses do it?!) and watching your little one startle themselves awake gets super old super fast.

First thing's first, though: just what is the Moro reflex? According to The New York Times' Health Guide, the Moro (or startle) reflex is "a type of involuntary response to stimulation. The Moro reflex is one of the many reflexes that are seen at birth." According to What To Expect, watching your baby have the involuntary Moro reflex includes the following: "He’ll tighten his body, fling his arms up and out and open up his usually tightly clenched fists, draw up his knees and then bring his arms and re-clenched fists close to his body — almost as if he’s giving himself a hug. Seconds later, as abruptly as the startle started, it’s over." There are also more than a few informative videos on YouTube, like the one below, that show parents what the Moro reflex actually looks like:

What To Expect goes on to tell parents that the Moro reflex typically happens in response to something that has startled your baby (which is why it's also called the startle reflex), like a loud noise or the sensation of falling.

Over the first six weeks of your baby's life the reflex starts to happen less frequently, and, according to HealthyChildren.org, the Moro reflex will most likely disappear completely by the time your baby is 4-6 months old. One of the ways your baby lets go of that reflex is from your constant comfort and protection. When your baby starts to become a little less scared of the world outside your belly, he or she will realize that you are there to protect them. The comfort that comes with knowing mom and/or dad are always there will help the reflex naturally dissipate.

If your baby still has the Moro reflex after 6 months of age, you might want to ask your pediatrician to have a look and/or assess for any possible problems. Likewise, Healthline.com says that if your baby doesn't have the Moro reflex at all and since birth, you'll want to have them checked by your pediatrician to rule out any spinal or brain injuries. However, the aforementioned potential problems would likely be picked up by your hospital staff at the time of your baby's birth, so don't be alarmed if you don't catch your baby startling themselves on a relatively frequent basis.

You might also notice your baby's root reflex, which Parenting says happens when you, or an object, brushes against your baby's cheek. The baby then turns toward the source of the touch looking for food. You have probably also noticed your baby's suck reflex, which Stanford Children's Heath says is another common newborn reflex in which a baby will try to suck on anything that comes close to their mouth, regardless of whether or not they hope to actually get a snack out of it. Both of these normal, natural newborn reflexes will also go away by the time your baby is 4 months old, according to Stanford Children's Health.

All three of these reflexes are just part of everyday newborn life, and you'll probably be surprised to miss them when your baby starts to grow up and leave the newborn stage behind.