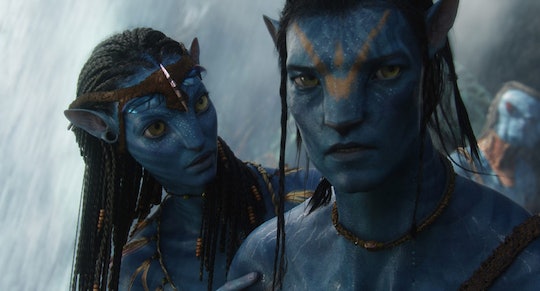 When Does The Next 'Avatar' Come Out? James Cameron Says There Will Be 4

Filmmaker James Cameron has become known for his award-winning spectacular blockbuster hits, making our hearts flutter with Titanic and our minds boggle with Avatar. His big fantastical ideas tend to leave his audiences itching for the next mega movie. Good news for the Avatar aficionados out there: Cameron announced on Thursday that there will now be four more sequels. So, when does the next Avatar come out?

Though he’d originally announced there would only be three sequels to continue the story of the mythical humanoid land of Pandora, Cameron said he had so much material to work with that four more films would do the trick to tell the full story. "We began to bump up against the limitations for our art form," Cameron announced at CinemaCon. “We have decided to embark on a truly massive cinematic project, making four epic films, each of which stands alone but together forms a complete saga,art form.”

The whole story will span over 14 years, but Cameron said each of the sequels will be able to stand alone, but together create an epic saga.

“I’ve been working the last couple of years with a team of four top screenwriters to design the world of Avatar going forward,” he said. “The characters, the creatures, the environments, the new cultures. So far, the art I’m seeing is in pure imagination, really far beyond the first film. It’s going to be a true epic saga.”

The first 2009 smash hit is often said to be one of the highest-grossing films in history, earning $2.78 billion worldwide and breaking Cameron's own record set by Titanic, which earned $2.19 billion.

Understandably, the pressure is on for Cameron to deliver, and he’s admitted the planned sequels will be an incredibly daunting challenge to live up to the success of the original. In an interview las December, Cameron explained that he would have to challenge himself to exceed expectations set by the first film.

“Obviously, expectations are going to be very high on these films, especially on Avatar 2, to make sure it wasn’t just some big fluke the first time,” he told Entertainment Weekly. “So we’ve got to deliver. I’ve created a nice rod for my own back, so they say.”

It’s definitely easy to expect cinematic greatness from the directing giant. We have a few more years to wait until we can see how he plans to deliver more on-screen excellence. So, until then we can just imagine how life will have changed on Pandora.