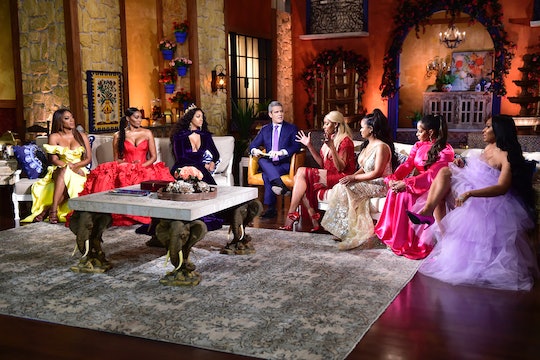 The big reveal from the Season 10 reunion was, of course, Kenya Moore's kinda-sorta pregnancy admission. She wasn't intending on revealing the information this early on, since at age 47, she's considered high-risk. And given the language she used, it seemed possible she wasn't even entirely sure she was pregnant yet. She's been in fertility treatment with her husband Marc Daly since last November, according to TMZ, and it sounded like she could have just been hoping they'd work within the year. Said Kenya during the reunion, part one: "We will definitely be welcoming a boy or girl in late this year." She confirmed on Twitter that she wasn't talking about a surrogate, but she also never really said the words "I'm pregnant."

Following the reunion, she wrote in an Instagram post, "My heart is full thank you to everyone for all your well-wishes. I was not planning on speaking about my pregnancy this early as due to my age I'm high risk." But that post has since been deleted. Of course, this by no means implies that motherhood is out for Kenya, but the way she nervously half-announced her pregnancy makes it seem like she got a little ahead of herself. We'll probably have to wait a few months to see what really happened. But if Kenya does indeed wind up giving birth next season, we can probably count on that moment to be captured by Bravo, like the arrivals of fellow cast babies Ace, Dylan, and and Ayden.

Meanwhile, newcomer and "Friend of the Housewives" Eva Marceilles barely managed to avoid giving birth at the reunion (she was contracting every 10 minutes while on camera and her obstetrician was on-call throughout filming). She delivered her son Michael Todd Sterling, Jr. on Friday, April 13, so if the ANTM alum levels up to full Housewife status next season, we'll hopefully get to enjoy some footage of baby Michael, too.

Also returning as a Friend of the Housewives this season was Kim Zolciak-Biermann, but her entire appearance was so disastrous that it's tough to imagine she'll be coming back next season. Virtually her only ally was Sheree, and even she took a lot of heat for befriending (and defending) Kim. Kim's spinoff series Don't Be Tardy was renewed for a seventh season this month, so it's my guess that she'll focus on her own empire and leave the Housewives behind.

The only other loose end left to tie up next season is the future of Cynthia Bailey's romantic life. After a partly sweet, partly drama-filled courtship with a younger guy named Will went off the rails, the pair took a step back from trying to date each other seriously. We'll have to see if Cynthia's self-imposed, post-divorce rumspringa wears off by next season and she opens herself up to a committed relationship.